It was certainly not my 1st experience with Hakushu… Once upon a time the 18 year old was a favourite until it became highly elusive. Then our original tasting group sampled the NAS avatar.… followed by the Whisky Ladies… leaving only our Bombay Malt & Cigar gents to sample… which happened one fine evening in March 2018.

Overall it was pronounced “very nice” until the topic of its price was raised. Which sparked a debate about whether Japanese whiskies are truly worth the hype.

Whether you think yes or no, the bottom line is our evening was filled with finely crafted whiskies with a range of characters and it was a most enjoyable exploration.

Here’s what the folks at Suntory have to say about their Hakushu distillery:

Straight from the untouched forests, soft and crisp waters and mountains of the Southern Japanese Alps, it is no wonder that Hakushu is a “green and fresh” whisky. Created by the dream for a new type of whisky of Keizo Saji, the second master brender, the unique taste made in distinct.

Four seasons in high altitude is praised by the most curious whisky connoisseurs and lovers of gastronomy. Its crisp and vibrant feel, unique in a single malt whisky, enlivens and liberates your senses.

What else did we taste in our “Japan Jaunt“?

This month our Bombay Malt and Cigar gents moved in a different direction…. far far far away from Scotland to land on Japan.

After much grumbling and discussion of how Japanese whiskies price has shot through the roof, we settle down to give the drams a proper try… noting that there was a narry an age statement in sight!

And what did we sample in our jaunt to Japan?

Which was followed by cigars (naturally!) home-made sushi, tempura, chicken teriyaki skewers, Thai curry and stewed peaches with much merriment joined by our partners too!

Interested in more whiskies from Japan and Taiwan? Check out the Asia section…

Or previous tastings of:

First up in the Whisky Ladies “Diwali Drams” evening was the once elusive Hakushu… part of Suntory’s trio of distilleries:

Of the Suntory stable of whiskies, the Hakushu 18 year was an early favourite of mine… however as the price tag rose and availability plummeted, my attentions wandered in other directions. Since then Hakushu launched this NAS and one can sometimes also find the Hakushu 12 year – including at another Diwali party in Mumbai!

But on to the Whisky Ladies experience…

To be honest, there was a mix of responses… Some found it eminently drinkable but a bit “flat”… Some enjoyed the apple and light peat whereas for others… Let’s just say that they remained a bit indifferent.

However, even those who were initially not terribly impressed, found that as they kept sipping, it somehow subtly wooed one over, one sip at a time.

Overall we concluded it has a nice interplay between hint of peat, lovely freshness on the nose and very light on the palate. Nothing to challenge you, but nothing to distress you either. Quite the opposite, it is quite a decent dram if you set aside any expectations in line with its exquisite age-statement avatars of old.

Those who are curious to compare tasting experiences, another Mumbai tasting group sampled the Hakushu NAS 43% in January 2017 as the start of an “East to West” themed evening.

This whisky was purchased from Frankfurt airport for around £45, tasted from a closed bottle in October 2017, Mumbai.

PS – By the end of the evening a Yamazaki also entered the fray… so in truth, we had three sets of “competitions” going… with a tremendous range of preferences – as it should be!

Gathering bedecked in their colourful finery, the Whisky Ladies came together to enjoy some interesting Diwali Drams… specifically from Japan and Bhutan.

And while we didn’t gamble at cards, we did pit together different whiskies to see which prevailed!

What all did we sample as part of our Diwali celebrations?

After our rather interesting evening exploring Rampur from India, Royal Lochnagar 12 year and the remarkable aged grain Girvan 28 year…. we had an opportunity to pick anything from our hosts floor to ceiling whisky cupboard…

My eye spied Suntory’s Toki… like Hibiki,Toki is made from Yamazaki, Hakushu and Chita.

Our immediate reaction is this would pair well with a cheese and fruit platter – think a nice range of old cheddar and applies. Or desert – something light not heavy. Or even an arugula salad with blue cheese and caramel walnuts.

I brought the glass with us for the dinner… our desert was a baked lagan nu custard. And the Toki paired with it? Perfection! Just the right interplay between the different elements and an ideal way to close the evening.

Here’s what the folks at Suntory have to say:

Also from our evening:

Another from the tasting archives… this time from Sept 2011. Rediscovering these notes brought a flood memories of my previous Mumbai flat… that had a fabulous cabinet in which all my whisky was stashed… now replaced in our current home by a larger storage space waaaaay up high in our kitchen pantry.

We broke with tradition and merrily abandoned all pretense of blind tastings… instead settled down for a sampling of various bottles. It became a  popularity contest between different regions and geographies as small pegs of multiple whiskies were sniffed, swirled, swallowed, savoured and yes – much discussed!

Speyside‘s dominated the evening with:

Islay‘s were represented by a few familiar friends:

Naturally what’s expressed here is only one interpretation based on snippets of conversation and personal bias. Would love to hear others opinions on any of these whiskies…

Once upon a time, the Hakushu 18 year was a favourite – an excellent example of exquisite balance with complexity and a touch of smoke to make it interesting. Then the price rose to ridiculous levels and availability went from challenging to near impossible.

With our original group, we taste blind, so our experience is influenced only by our reactions not any other element… hence we had no clue we were about to experience a Hakushu NAS avatar picked up in Japan.

Overall we found this an exceedingly ‘friendly’ whisky, absolutely no harshness, very smooth. Light, uncomplicated, enjoyable in its way.

Speculation ran against it being Scottish and Japan was mentioned but it didn’t quite fit the profile of familiar offerings. We found it quite ‘youthful’ and possibly matured in white oak barrels.

And the reveal… Hakushu?!? Where was the light dancing peat? The complexity?

Conversations turned to aged Hakushu vs its current re-incarnation… disappointment over the NAS Chita vs the beautiful Chita 12 year, Yoichi‘s of yore not coming close to their NAS avatar…

Has the Japanese whisky ‘bubble’ burst? Has the price surpassed quality? While still ‘well constructed’ where is the ‘soul’ that tipped the whisky from being ordinary to extraordinary?

Just to compare, what do the folks over at Suntory have to say about this Hakushu?

Can’t argue with most except the smoke… clearly it was too subtle for us!

Other whiskies sampled that evening include:

For more related updates and activities, check out:

Our January 2017 host’s theme was a journey from East to West… following a geographic progression from Japan to India to Italy and finally Scotland. 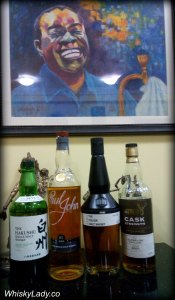 It was a fabulously curated collection that shifted in styles and threw in surprises too! Each was sampled completely blind before the reveal.

For more related updates and activities, check out:

After packing for an impromptu trip to Amsterdam, I decided to treat myself by revisiting one of my favourite Japanese whiskies – the Hakushu 18 year.

Years ago Suntory came to Mumbai to explore the Indian market. My friend and I were introduced to their range and even from the first sip, the Hakushu whiskies stood out for me as far more exceptional than their better known Yamazaki cousins.

Since I picked up my first bottle in Singapore, the price has steadily risen. On my last trip to Tokyo, my quest was for lesser known Japanese whiskies, so I skipped re-stocking this favourite yet found even there it was inching into to the more expensive category.

There are just a few drams remaining in my last bottle and I’ve jealously guarded them… storing it now for several years. 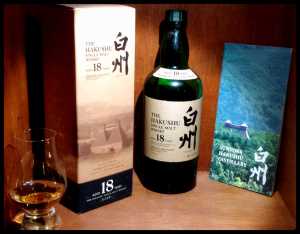 So… after such a long time, has my memory of this delightful whisky faded? Has the whisky itself stood the test of time despite its storage?

My memories were of an exquisite nuanced whisky… one that had multiple elements and needed time to distill and describe the different notes and flavours. The fresh grass nose was more subdued than I remembered however it is no surprise to have dulled after being stored in an open bottle for so long.

Also, when I first tried the Hakushu 18, it was before I sampled Irish potstill whiskies. Sampling now, I’m reminded of Yellow Spot or Redbreast – both superb whiskies.

So is it still a favourite? Well… it would certainly remain in my recommended list however may not be a priority to replace when the last drop of this bottle is gone… more because of its current price point than preference.

Any other opinions? (aside from castigating me for storing whisky for so long!)