Yeah! This is officially the beginning of “Year 2” since I started sharing a monthly round-up of Whisky Lady sampling adventures!

January started off slow… then picked up pace to cover 25 whiskies – including back-to-back whisky tastings last night and the night before!

Our original group had a light sprightly feel to the evening with:

And The Whisky Ladies of Mumbai?

Next up in the Bruichladdich explorations after the Organic and PC Scottish Barley, was an Octomore! Again, compliments of the Canadian sampling stash from my aunt and uncle.

In a slick black bottle, Bruichladdich Octomore is high octane heavy peat… as in hold on to your hats folks, we’ve got peat, peat and peat!!

Pronounced Ochdamh-mor, it is unabashed but also surprising. The 169 on the label refers to is being a whopping 169 ppm. From 2012, bottled at cask strength, this five-year old packs a punch.

It is surprisingly well balanced for something so heavily peated. It isn’t an everyday dram however I found myself simply sipping and enjoying more than analysing and distilling its character – a sure sign that on an unconscious level this whisky works!

Here’s what the producers have to say about this Octomore:

Well… that’s quite the description! Leave aside the overly enthusiastic elements, it is indeed on track for what I found.
Here’s what others have to say:

The folks over at Bruichladdich broadly categorise their whisky experiments into three groups:

Not so long ago we sampled the Bruichladdich The Organic Scottish Barley 50% – an interesting whisky but not one that jumps out for me.

However it was sufficiently different to prompt interest in exploring their PC and Octomore expressions… thanks to the “Canadian stash” from my aunt and uncle, I had an opportunity to try representations from both!

So what’s up with the Bruichladdich Port-Charlotte? The name Port Charlotte comes from a village near Bruichladdich, which once boasted the Lochindaal Distillery, that ran for 100 years between 1829 and 1929. The approach is to peat to 40 PPM and play around with different barley.

In this case, I sampled the Scottish Barley…

And what did I find?

There is lots going on with this one – strong, very direct and impossible to ignore. The herbal quality makes it distinctive… certainly this more to my preference than the Organic. I certainly appreciate what the folks over at Bruichladdich are trying to achieve.

Here’s what the distillery says… warning it is quite a wordy read!

Here’s what others say:

Ah.. time to return to the Canadian Stash… Next up? BenRiach Septendecim or 17 year to us ordinary folks! This sample came compliments of my aunt and uncle.

Now, this is not my first introduction to BenRiach. Nope. A few years ago our our merry malt gang sampled the 16 year and then on a trip to Singapore in 2015, I went straight for the remarkable BenRiach 21 year (1988) 54.8%.

Both of these BenRiach avatars followed more of a ‘classic’ Speyside style and eschewed heavy peat. Not so the latin series – these are full on peat – and Septendecim is reputed to be an excellent example. I simply had to dive in! 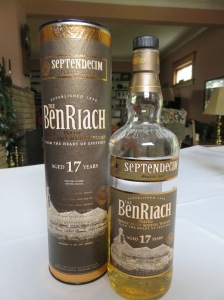 The nose is quite superb – peaty perfection that is neither in your face nor holds back from giving you a chance to revel in it. However with such fabulous aromas, the palate is somewhat wanting… falling slightly short of what the nose promises. As it evolves into its finish, it goes up again several notches.

Don’t get me wrong, this is a solid dram and well worth sipping… it simply had the potential for ‘Wow!’ complexity and depth yet instead landed just shy of that. Might be worth a revisit though.

Here’s what the distiller has to say:

The new 17 year-old has been matured only in ex-bourbon casks and continues BenRiach’s quirky trend of using Latin names – such as Authenticus, Curiositas and Heredotus Fumosus – for its richly-peated expressions.

Here’s what others say:

In recent years, BenRiach has been playing around with peated expressions, however to get a real sense of the distillery, nothing beats sampling one of their classic Speyside drams.

I sampled this 16 year in March 2015 after our Paul John Indian whisky evening. It was just a quick sip or two but as I was in the ‘note taking’ mode, jotted down a few impressions…

Here’s what the folks over at BenRiach have to say:

This smooth single malt has an elegant full taste and aroma that captures fruity floral notes, with fascinating overtones of honey, vanilla, spices, toffee and apples.

Tonight I was all set for our Mumbai Whisky Club’s monthly tasting … and as our host’s wife now regularly travels to Ireland, I had visions of sociable whiskies dancing in my head with a palate primed for pot still drams!

Alas our sampling was unavoidably postponed to next week… but I just couldn’t shake that Irish mood… So decided it was high time to revisit the joys of Irish pot stills!

A lot is said about the distinctive character of pot still whiskies – that they have a spicier character that comes from their way of blending malted and unmalted barley. Experts say it is this mash rather than the pot itself that qualifies a whisky as being a pot still whisk(e)y. 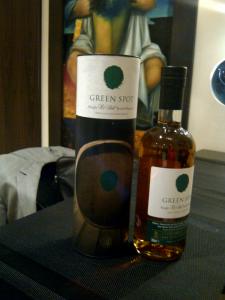 First sampled November 2013… I later tried the standard 40% and must say, this cask strength one is by far my preference!

Prompted by a recent revisit of Kichoman’s Machir Bay in Singapore, I decided to unearth from our archives a tasting session which occurred in September 2013 with Glenturret 10 year, Auchentoshan 14 year Cooper’s Reserve and Kilchoman Machir Bay.

It was an evening mad with the cacophony of Ganapati processions, requiring all of us to brave nasty traffic snarls to exclaim by the end of the evening – “It was worth the effort to come!”

None could guess the distillery though it was clearly not a Speyside or Islay. With the unveiling it was shared this particularly Highland whisky was bought at the distillery and, back in 2013, not readily available beyond the distillery doors…

Glenturret is found on the Turret River in Perthshire. Touted to have been established in 1775 with some earlier elicit efforts from 1715, it claims to be the ‘oldest distillery in Scotland.’ Today it is better known for the “Famous Grouse Experience.”

Curious about other Glenturret expressions?

Kilchoman is one of those distilleries to watch… years ago they effectively pushed the boundaries of complexity for a YOUNG Islay whisky. And just keep getting better and better. The travel retail exclusive Coull Point is a current ‘everyday dram’ favourite. I’m eagerly awaiting an opportunity to try their 10 year anniversary whisky.

At the 2015 IWSC Awards, Machir Bay won gold, it also won best Islay under 12 year at the 2015 Scotch Whisky masters and boasts of many other recognitions.

My sampling journey with Machir Bay is:

The Singapore evening prompted me to pull out from our archives the 2013 tasting notes… which was sampled together with the Glenturret 10 year and Auchentoshan 14 year Cooper’s Reserve.

Here is what we found then…

There was a challenge in pinpointing this offering – the peat was too subtle for a Laphroaig and didn’t quite fit the qualities of other Islay mainstays – however the region was guessed spot on!

Also aged in ex-bourbon casks and finished in sherry butts like the Cooper’s Reserve, it is far more robust. Machir Bay captures the senses and was the clear favourite – even paired post dinner with chocolate. To learn it is available in India and not ridiculously expensive – my oh my we lucky folks!

Each sample was a contrast and unique. Interestingly, all improved with a few drops of water whether lowland (Auchentoshan), highland (Glenturret) or islay (Kilchoman)! Slainthe!

For those curious, here’s what the folks over at The Vault Fine Spirits (based in Mumbai) have to say about Kilchoman Machir Bay:

Machir Bay, a heavily peated (50 PPM) whisky, is a vatting of 4 and 5 year old ex-bourbon casks, with the 4 year being finished in oloroso sherry butts for 4 weeks prior to bottling. Machir Bay was named ‘Whisky of the Year 2013’ at the International Whisky Competition.

Tasting Notes: The Machir Bay starts with a nose of soft cooked fruits with strong peaty aromas which in turn leads to a palate of mixed fruits and vanilla with an intense sweetness before a long lingering finish.

Last in our Ballantine’s Signature Distillery Collection was Glentauchers.

While there is apparently an official bottling kicking around, it certainly isn’t one our merry malters have stumbled across… not even readily listed online at either Master of Malt or The Whisky Exchange.

More typically, Glentauchers is found in Ballantine’s and Teacher’s – both widely consumed blends. As in 99% of it goes to blends! So you can appreciate my interest in exploring a sense of its character through Ballantine’s eyes (or taste buds / nose as the case may be!).

The preferred setting for this whisky? Could drink by the fire, in a more social manner with the caveat that it goes down so smoothly that you may not even realise that you’d finished it and reached out for more!

Overall, I must say, it was interesting to have a blend pay homage to the characters of its single malt components. We each did our ‘preference’ line-up… for my friend it was:

For me, it was along the same lines, except I would swap the ‘last’ two with Glenburgie just a smudge ahead of the Scapa.

But the very fact that the Miltonduff even made both of us pay attention was saying something.

I will admit to having certain expectations of this expression… Late 2015, we sampled the Glenburgie 15 year and two years ago, I also briefly sampled a Glenburgie 18 year old independent bottling… Between past brushes with this distillery and particularly after the surprisingly good Miltonduff, I was primed to enjoy!

So, did this Ballantine’s blend meet or exceed my anticipation? 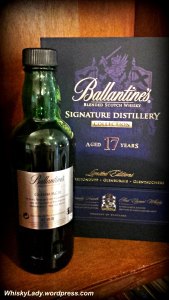 Overall – The most complex of the bunch yet also vaguely schizophrenic. For my companion, it simply was not worth the effort and time to unwrap the full flavour package. The nose at least initially took us on a journey however was belied by the overwhelming sweetness on the palate… There was at least some different elements however they simply didn’t come together harmoniously.

I couldn’t help but recall the delightful Glenburgie 15 year Gordon & MacPhail bottling we sampled in November. It was pronounced the “Downton Abbey” of whiskies as there was an elegant refinement to it, yet still had sufficient happening to make it worth paying attention to…