So far I’ve only managed to acquire the Highland and Speyside, together with a Royal Brackla. Whilst I was impatient to try all three, I decided to start with trying the Highland. Though the distillery is not directly stated, the longitude and latitude provided on the bottle brings one to Teaninich distillery in Alness (N 57° 41’30.35″ by W 4° 15’28.75′).

Now part of the Diageo stable, Teaninich was built in 1817 by blind Captain Hugh Munro on his estate of Teaninich Castle. After changing hands several times, by 1904 Robert Innes Cameron took charge, adding it to his interests in Benrinnes, Linkwood and Tamdhu. It was then sold to Scottish Malt Distillers and expanded in 1970 with both a new building and stills. By 1984, operations were halted then resumed in 1991 with Diageo renovating the distillery fully in 2013.

One unique feature of Teaninich distillery is use of a mash filter press rather than mash tun. Whilst more expensive, requiring more maintenance and space, this method is considered more efficient, able to process “challenging” grains like rye and results in a clear higher gravity wort which contributes to a spirit with limited cereal notes.

I will admit this was my first introduction to Teaninich – which is no surprise given it is used for blends with only a limited 10 year Flora and Fauna bottling and a 200th anniversary 17 year officially available.

Overall it is an easy drinking dram – uncomplicated, fresh yet with substance – when sipped with a very generous dollop of water! I must confess I enjoy it most with almost 1/3 cold water.

What more do we know? Only that it was from a single refill sherry butt with 600 bottles produced.

Rather than tasting notes, the North Star team share the following quote from Aedan Andrejus Burt:

The first thing you need to know about the Highlands: they are vast. The Highland Line came about on whisky maps for tax reasons in 1784, when customs duties were set lower in the Highlands to encourage local farmers to register their stills. It didn’t work. But it has given us a range of incredible whiskies to drink. The Highland style is often heaver and slightly spicier than Speyside, but still sweet. Peat may feature, as some distilleries maintain older practices, but there is no one representative whisky for the Highlands. Like Scotland itself, embrace the diversity.

I miss the fabulous North Star tasting notes, however Master of Malt has this to say:

I purchased this bottle in May 2020 during our COVID ‘shut-in’ from Sansibar for EUR 37.82 plus 19% tax. There is zero doubt this is a value for money dram!

Don’t want to miss future posts? Why not follow Whisky Lady on:

Yushan is the new brand for Taiwan’s Nantou Distillery whiskies – currently available with three expressions – an ex-bourbon, ex-sherry and this blended malt.

I will admit I’ve tried none from Nantou before now… and frankly bought it on a whim!

It isn’t a spectacular dram however it isn’t bad either. Something uncomplicated to enjoy on a summers evening.

Here are tasting notes from the chaps over at Master of Malts have this to say:

I picked this one up from Master of Malt for €37.36 when they were still able to ship to Germany.

Til date, all other brushes with whisky from Taiwan was exclusively with Kavalan:

Don’t want to miss any posts? Why not follow Whisky Lady on:

Wow! Time flies! Our evening comparing Japanese blends from the 1980s and today took place early 2020 in Mumbai. We kicked off with a pair from Suntory, followed by these Nikka Super Old bottles.

The story told by the Nikka folks is:

Super Nikka is a blended whisky born in 1962.
Masataka devoted himself into creating this whisky soon after his wife Rita’s death to represent his deep love for her.
He could never have accomplished his dream to make genuine whisky in Japan without the support from Rita.

Since 1962, little has changed about the bottle… but what about the contents of this blend?

Nose and taste were contrasting…  And after we returned? Hmm… sorry no polite way to put it… it was simply nasty. Sorry… what ever happened sitting for decades it didn’t do this  dram any favours I’m afraid.

How different this was from our previous experience with the European revival version!

Again, I will admit I wasn’t at my best… my olfactory senses dulled by illness, but I had company in a less than enthusiastic reaction. Just check out the fabulous notes on the Whisky Ladies of Mumbai blog.

However our less than stellar impressions didn’t diminish the appreciation of trying a bit of history in a bottle side by side with its modern avatar. A worthy experiment indeed!

And above all the company of our combined Whisky Ladies and Bombay Malt & Cigar gents evening was fabulous and I miss our tastings immensely! 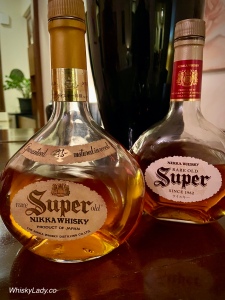 Suntory is the grand daddy of Japanese whisky and a fitting place to begin our evening comparing old and new blends.

So what exactly was Suntory Excellence? It was from Yamazaki distillery, likely released in 1980, possibly using whiskies aged 30 years old. Some sources indicate it was created to start competing with Scottish blends – at a time when Japanese whisky was little known beyond certain circles! Hence their putting it in a ‘decanter’ bottle with a glass stopper rather than the kind of bottles that were standard at that time.

While we assume it was a blend, I came across a few references that indicate the expression was intended as a pre-cursor for easing into single malts. Specifically, the Yamazaki which was then launched as a single malt in 1984.

Blend or not (though likely a blend!), Suntory Excellence had two versions – the 1st sported a neck ‘ring’ like the one we tried vs another which came out later that had the “excellence” tag integrated as part of the bottle.

Could you find it today? Primarily the later avatar seems to pop up on auctions and was last seen with prices in the GBP 450 range. Our version? The closest I could find was on auction for $3,800.

What did we think? 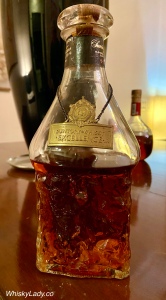 This was a curious one… for the nose we initially kept being reminded of other spirits like calvados, cognac or even armagnac. It teasingly reminded our host of his Christmas pudding made a year in advance, kept in the fridge enabling the alcohol to concentrate… However on the palate it was a shadow of the promise – like wine that gets too old and become a bit watery.

As for me? Confession time… I was down with a nasty flu so truly could not give justice to the experience… So I took a wee sample of the original with me back to Germany.

I finally re-opened it this evening…. The aroma initially had an intense varnish dimension, then shifted into dates, a sweet salty caramel on the palate with an aged cognac like quality. It was similar to our original impression with something peculiar and distinct about it that differed from most modern blends.

And with a splash of cool water? The fruitiness that was hinted on the nose came to the fore, the varnish tamed and the intensity dampened. But that element that came across as being more akin to calvados than whisky was even more pronounced. Interesting… and remarkable to have an opportunity to try it some 40 years after it was originally bottled.

So what about its modern cousin?

This one just landed in the middle of our tongues and then nothing. We really tried to find something.. one even piped up maybe jelly beans?

Not bad, holds up better as a blend. For some this pair were the winners of the evening. But don’t take my word for it! I encourage you to check out the fabulous tasting notes on the Whisky Ladies of Mumbai blog!

What about other whiskies sampled from the Suntory stable?

Don’t laugh… but I seem to be developing a wee obsession… And I completely blame the folks at North Star for bottling such tempting drams!

Since moving to Germany a whole world of possibilities opened up to order whisky! The initial challenge with deliveries were I was always at work so never home. Then our world changed and I was always home, available to accept… Definitely a silver lining in these strange times… So what have I picked up so far?

Don’t expect a full set of tasting notes anytime soon… however as opportunities present, I look forward to sharing impressions.