North Star has a Millennial Series with whiskies from Scotland’s four main regions – Highland, Speyside, Islay and Island. I started with the Highland and have now cracked open the Speyside! Alas I haven’t been able to get my hands on either the Islay nor the Island, so this will conclude my exploration of this series.

The distillery isn’t directly stated, but the longitude and latitude provided on the bottle brings one to Aberlour distillery in X (N 57° 26’36.14″ by W 3° 14’17.04′). When I think of Aberlour, what comes to mind is a robust sherry bomb – particularly A’bunadh which was once upon a time regular duty free cask strength purchase.

So what about this one? Well… it was sampled over a few sessions – including with our Whisky Ladies of Europe! 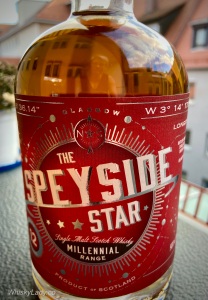 Overall it lived up to its promise of being a proper sherry dram – though not as overwhelming as some cask strength A’bunadh’s I’ve experienced! What was remarkable was the consistency – from 1st whiff to finish – it followed a common theme. I had jotted down a few notes from an earlier solo tasting months ago… to then see notes from the tasting with the ladies was practically identical!

The only shift was after we set it aside and returned after an hour. We immediately found it a bit sour or tart – crabapples with a bit of medicinal sweetness, orange peels and cloves. And yet – even this was all aligned to the overall character of the dram.

Rather than tasting notes, the North Star team share the following quote from Aedan Andrejus Burt:

Speyside is often considered Scotland’s sweetest and most approachable region. Wherever you go, they’ll introduce you to a dram, and probably something the locals call a ‘breakfast whisky’ soon enough. Home to around 50 distilleries, over a third of Scotland’s total, the area covers a 50-mile strip between Inverses and Aberdeen, around the River Spey. For that, most distilleries have their own water source, of which they are immensely proud. The honeyed and fruity character of Speyside whiskies make them highly sought after, and the banks of the Spey accommodate many of the country’s best known stills. 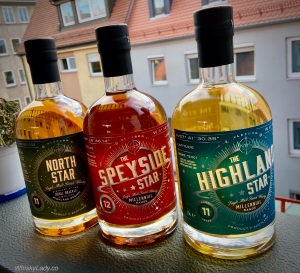 I purchased this bottle in May 2020 during our COVID ‘shut-in’ from Sansibar for EUR 37.82 plus 19% tax. There is zero doubt this is a value for money dram!

Curious about earlier Aberlour tasting experiences? Well… there have been a few…

Don’t want to miss future posts? Why not follow Whisky Lady on: