Another from the tasting archives… This time the post is truly a ‘blast from the past’ – Oct 2011.

This month we were back to our standard format and blind tasted before revealing the whisky. The session featured: Glenlivet Nadurra, Scapa 16 yr, Mitcher’s Straight Rye, Kilchoman Spring release followed by an extra treat Caroni 18 yr rum.

It was an exceptionally lovely evening in Worli with perfect hosts. A comfortable setting, the right music, glasses, spitoon and cucumbers all laid out, followed by the most fabulous nibbles… yum!

The contrast between the different single malts was also a wonderful learning experience… which was, naturally, the real focus of our evening. 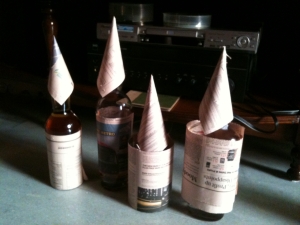 The legs were slow though closely spaced, colour bright gold. The nose was sweet with a hint of honey, grass, a little “woody”. Not off to a bad start… and then we sipped, spit and then sipped and swallowed. While not ‘knock me down’ harsh, the first hit definitely had an edge. Spicy was a word bantered around a bit. The finish was also… well.. not so impressive.

Our overall conclusion was this perhaps wasn’t a keeper… Unveiled we were surprised this is one of the few Glenlivet’s non-chill filtered considered to be ‘good’. The distillers notes included words like ‘fruity’?! Puzzled, we chocked it up to a mass production distillery and moved on… til somewhere along the way a discussion about ambient temperature in Scotland vs India with an impact on flavour led to an inspired idea – why not chill the Nadurra and see if it makes any difference?

PS The debate on alcohol strength was lost by all thinking it was lower than 54.9%.

The legs were broad and a little faster than the Nadurra. The nose was certainly also sweet, with a more pronounced heather honey aroma than the bolder Nadurra. First savour was clean, was there a teasing hint of peat? Perhaps a little of the ocean? Neat was clearly best – any dilution simply detracted from its gentle dance on our palates. The finish wasn’t notable however this Oarkney Islands contribution was deemed light, lovely every day enjoyable. Scapa is slightly ‘cultish’ whiskey and we were a bit disappointed about such limited details on its maturation process.

What a contrast to go from the Scapa to a Rye… Colour very dark – distinctly so. The notes were apple pie… comments were that it is non-whisky or almost wine-like. Our first American offering, it was a fabulous addition to our tasting journey. We learned later is that this is quite a rare bottle with the Mitchers team’s comment “You have tried one of our best!” Lucky us!

Caramel notes… In your face peaty… smokiness of a cigar or pipe. Adding water transformed it – toned down the peatiness and opened up the whisky.  Then some fruity flavours emerged with a nice lingering smoky finish. The surprise post unveiling is that it was quite sophisticated for what we understand is only a three-year old from Islay region. For a few, the Kilchoman Spring 2011 release was the clear favourite. We also experimented by adding a twist of a mosambi peel. What an exceptional combination!

Now back to the Nadurra… Was it the booze in our collective systems, or just residual disappointment from our earlier quaffing? All one can say is there does indeed seem to be a clear correlation between temperature and taste. Cooled – the Nadurra was a delight! The earlier harshness was chilled into submission, allowing the fruity flavours in the distillery’s tasting notes to actually emerge.

Our evening closed with a little ‘extra’… not a whisky but instead a remarkable rum – yum yum!

Another special surprise our host pulled out of his marvellous liquor cabinet was a Caroni. Clearly no ordinary offering, it was rich, layered, full of flavours and soooo smooth going down. The alcohol content was deceptively much higher than it seemed – so one to add caution if doing more than sampling! It is also a fascinating story of an Italian so passionate about this rum that he bought the entire distillery just to not be deprived of his favoured Trinidad rum. The packaging is also superbly stylized. Naturally we also added a hint of mosambi to this too… mmm mmm good!

Anyone have other comments on these whiskies and rum?

Last in our Ballantine’s Signature Distillery Collection was Glentauchers.

While there is apparently an official bottling kicking around, it certainly isn’t one our merry malters have stumbled across… not even readily listed online at either Master of Malt or The Whisky Exchange.

More typically, Glentauchers is found in Ballantine’s and Teacher’s – both widely consumed blends. As in 99% of it goes to blends! So you can appreciate my interest in exploring a sense of its character through Ballantine’s eyes (or taste buds / nose as the case may be!).

The preferred setting for this whisky? Could drink by the fire, in a more social manner with the caveat that it goes down so smoothly that you may not even realise that you’d finished it and reached out for more!

Overall, I must say, it was interesting to have a blend pay homage to the characters of its single malt components. We each did our ‘preference’ line-up… for my friend it was:

For me, it was along the same lines, except I would swap the ‘last’ two with Glenburgie just a smudge ahead of the Scapa.

But the very fact that the Miltonduff even made both of us pay attention was saying something.

I will admit to having certain expectations of this expression… Late 2015, we sampled the Glenburgie 15 year and two years ago, I also briefly sampled a Glenburgie 18 year old independent bottling… Between past brushes with this distillery and particularly after the surprisingly good Miltonduff, I was primed to enjoy!

So, did this Ballantine’s blend meet or exceed my anticipation?

Overall – The most complex of the bunch yet also vaguely schizophrenic. For my companion, it simply was not worth the effort and time to unwrap the full flavour package. The nose at least initially took us on a journey however was belied by the overwhelming sweetness on the palate… There was at least some different elements however they simply didn’t come together harmoniously.

I couldn’t help but recall the delightful Glenburgie 15 year Gordon & MacPhail bottling we sampled in November. It was pronounced the “Downton Abbey” of whiskies as there was an elegant refinement to it, yet still had sufficient happening to make it worth paying attention to…

Next up in a sampling series of Ballantine’s Signature Distillery Collection is the Miltonduff 17 year.

So what do we know about Miltonduff?

Well, it is said to have been established in 1824 and located in the Pluscarden area of Speyside, near an old Abbey. There is a Canadian connect via Hiram Walker’s purchase of the distillery in 1936, along with Glenburgie to produce malt whisky for their blends. At the time they used Lamond Stills which then, in 1981, were replaced with regular pot stills to increase production. Relatively soon thereafter the Hiram Walker stocks were acquired by Allied – its largest distillery at the time. Then in turn, it was further acquired by Pernod Ricard in 2005.

While you won’t readily find too many ‘official’ Miltonduff single malts out there, it has certainly been around and a mainstay for Ballentine’s blends. 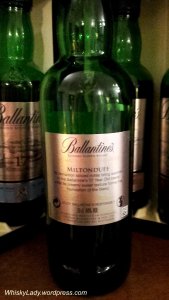 And what did we find?

We revisited this whisky after about 20 minutes… alas the nose had all but disappeared – leaving mostly a toffee sweetness. However it was a completely comfortable, enjoyable dram. Nothing fancy about it but with the twinkle of the Christmas tree lights and the slight nip in the air (for Mumbai!), it was good enough to prompt after our light sample of all four whiskies a return. Yup! It was the dram of the night for us.

This one had enough going on to prompt a ‘setting’ to sip….

“Cashmere sweater and jeans in front of the fire – comfortable and anti-social but at least you got out of bed today.”

What the Ballantine’s folks had to say:

Its cinnamon spiced notes bring warmth to the Ballantine’s 17 year old blend while its creamy sweet texture forms the foundation of the blend.

And our final thoughts? The very fact that the Miltonduff even made both of us pay attention says something and my fellow taster decided it just might be worth trying to track down a Miltonduff single malt!

Ballantine’s Signature Distillery Collection 17 year are blends… that were designed to show off their component whiskies.

First up in our sampling was the Scapa from the Orkney Islands in the north Highlands, not far from the Highland Park distillery. Of the four Ballantine’s whiskies featured in the Signature Distillery Collection, Scapa has distillery produced single malts – initially a 14 year which was then replaced in 2008 with a 16 year avatar.

While not stated on the label, the gents over at Malt Madness share that Scapa is matured exclusively in bourbon casks. The whisky is unpeated though the water supply is known to be quite peaty, hence is piped for over a kilometre in large iron pipes to keep its more delicate quality.

Quite drinkable, linear nose, flavour and finish however all aligned and overall pleasant.

I will be honest, I expected something with a bit more of a maritime feel… When you think Orkney Islands, you think of sea spray from a wild remote corner. I recalled an earlier sampling of the Scapa 16 year it had more of that element… plus a distinctive heathery honey.

While I supposed we could morph the hay quality with the perfume notes into something in spitting distance of ‘heather’ and it certainly had the honey, we didn’t find the fruity quality the Ballantine’s folks describe or what I remembered from sampling its single malt cousin.

Here’s what the chaps over at Master of Malt have to say about this one:

Would I say it represents a ‘Scapa’ style or its contribution to Ballantine’s? Hmm…. It is easy to see why most of this whisky goes into a blend. It has a restrained quality that would play well with other profiles.

As for this expression? Does it stand on its own as a credible blend? It was ‘nice’ and definitely drinkable. However would I run out and buy a full bottle? Nope… just not my kinda whisky.

Is it a blend? A single malt? Clearly Ballantine’s Signature Distillery Collection are blends… yet are they the slippery slope of introducing loyal blend fans to single malts? Or trying to woo promiscuous single malt explorers to the land of blends by enticing with ‘showcasing’ Ballantine’s ‘iconic malts’?

My curiosity got the better of me…. so picked up this sample pack in Singapore and cracked it open a cool December evening with a merry malt mistress!

Here’s what they have to say about their special Ballantine’s 17 year olds:

Its cinnamon spiced notes bring warmth to the Ballantine’s 17 year old blend while its creamy sweet texture forms the foundation of the blend.

Its fruity, floral and rich-flavoured malt sits at the heart of the original Ballantine’s 17 year old blend.

Here is what they say about their standard Ballantine’s 17 year:

What did we find? Ah… you will just have to check out the links to the different expressions: