Back in the days that I regularly travelled to Singapore, I heard about an interesting store – vomFASS – where you could find specialty spirits, oils, vinegars and more!

A friend in Indonesia even purchased one of their whisky blends which we enjoyed one fine evening in Jakarta! However I somehow never made it to their Singapore shop… I was certainly curious, but there was always some other work or play priority…

Fast forward several years and now I – remarkably and conveniently – live nearby a vomFASS shop in Nurnberg, Germany!  For those who haven’t yet encountered these folks, over the last 25+ years, they’ve grown far beyond Germany with franchises scattered around 20 odd countries. The concept remains – purchase both bottle and liquid, return to refill your bottle from the cask you liked – if still available – or try something new.

Naturally I couldn’t resist and found myself picking up a trio!

So what made it into a wee 100 ml “barrel to bottle” vomFASS experience?

For those who make it to Ireland and start to explore beyond the big daddy Midleton, known best for its Jameson brand, there are a plethora of options… yet still only a small yet growing number of distillers.

Teeling is one of them and relatively recently launched a new “Brabazon Bottling” series – to explore maturation experiments with fortified wine – kicking off with this Sherry avatar and then launching a Port version for the 2nd series. Our host had tried both and knew to reverse the tasting order so we had the 2nd first and the 1st second. But what matters more than series and tasting order is what we thought! 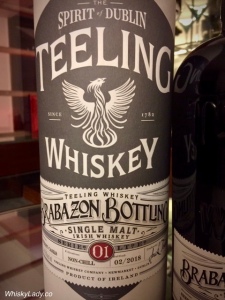 Early reactions to this one after the 1st sip was “I like it! I really like it!” With comments about how it simply envelops into a nice warm hug… In many ways it was the yin to the yang of the Port with a slower start on the nose, blooming fully on the palate, and slowly tapering into a lingering finish.

Which sparked a lively comparison between the two non-chill filtered Brabazon Bottling boys… Which was preferred? Why?

Some were decidedly against this one. Finding it a bit challenging and lacking in a certain something required to make an appealing tipple. Others had the opposite reaction, really enjoying it.

I’ll admit I was in the 2nd camp and found it an interesting twist on the sociable quality I’ve come to expect from Teeling.

And what do the folks at Teeling have to say?

Series No. 1 focuses on sherry cask maturation and consists of a range of carefully selected sherry cask aged whiskeys producing a full flavoured sherry influenced Irish Single Malt. This bottling consists of a vatting of 6 different sherry casks, carefully chosen for their complementary character. The Brabazon Bottling Series 1 is bottled at 49.5% ABV with no chill filtration allowing for all the natural flavours of this whiskey to be retained. Limited to just 12,500 bottles, this is a whiskey to savour. 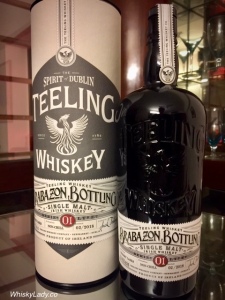 What else was picked up Whisky Ladies Irish Trio:

After the delightful Glendalough, we were primed and ready for more Irish explorations!

Our Whisky Lady host brought back an interesting duo – a new Brabazon Bottling series from Teeling that explores Sherry in the 1st and this Port in the 2nd. Each series has different bottlings – with month and year on the label.

We started with the Port, bottled in September 2018… What did we think?

This one sparked quite a bit of debate. We thought it had an interesting nose that became quite lovely. However the palate was quite mixed.

One lady quipped it was the kind of whiskey that was like a train with a great start but somewhere in the middle “Bro! I need to get to the next station!”

And what did we mean by this? Both the nose and finish received a thumbs up. However the taste simply wasn’t for everyone’s palate. Yet for others, this was a clear preference.

For me? I couldn’t help but think of a hot toddy… Something about the finish in particular made me speculate if it might make a rather superb one!

And what do the folks at Teeling have to say?

Jack Teeling, Founder and Managing Director of Teeling Whiskey, commented “Our new Irish Single Malt brings together two famous Dublin family names – the Teelings and the Brabazons. By making reference to the historical Brabazon name, we are telling the story of why our family first came to the Liberties area of Dublin. But more importantly we are telling the story of why we are here now. Our aim with the whiskey was to create a full bodied tasting experience for people who enjoy the added complexity and taste sherry casks impart, and at the same time continuing our goal to expand the spectrum of flavours available from premium Irish whiskeys.”

And specifically anything about their 2nd series featuring port?

Not on the Teeling website that I could find, however the Celtic Whisky Shop folks have these tasting notes: 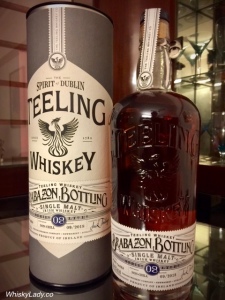 We continued on to the Brabazon Bottling with Sherry… and contrasted and compared the duo. Some preferred the Port, others the Sherry. I’d be curious to hear from others familiar with both which they prefer and why?

What else was picked up Whisky Ladies Irish Trio:

In November 2016 I was travelling and missed our original tasting group’s session. However our host stepped up to the role to ‘chronicle’ the sampling experience.

She went well beyond merely jotting down tasting notes… she visited the distillery and documented observations from there too! What follows is a blend of both for your reading pleasure…

“The Irish invented the stuff. The Scotts perfected it.”

Whiskey was first recorded in Ireland in 1405 then 1495 in Scotland. Old Bushmills Distillery claims to be the oldest (started in 1784) and Irish whiskey is most popular in the USA. Prohibition, independence war and trade disputes with Britain all impacted the Irish whiskey industry.

In 1966, there were only a handful of Irish distilleries. By the 1970s, only two – Bushmills and New Middleton. Yet now, in the last 20 years, Irish Whiskey is the fastest growing spirit in the world. There are currently 12 distilleries with more being set-up yet to release their whiskies.

Teeling was the 1st new distillery built in Ireland in the last 125 years. Its character comes from their approach: 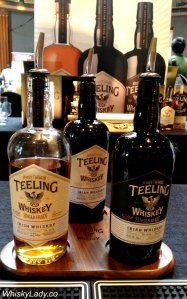 And now to the tasting notes:

Speculation on the strength ranged from 40% to at most 43% to a lone voice suggesting 45%.

Overall conclusion was this is not a sipping drinking, but a drinking whisky. While it lacks complexity and body, if someone served “I would enjoy it!”

This whisky is matured in California red wine barrels and known for its spice, red berries, grapes, with a dry, woody, spicy finish.

One shared he certainly preferred this to the 1st whisky as had more character.

Overall the conclusion was that none of the three sampled so far were complex.

What makes this whisky distinctive is it has further maturation in ex-rum barrels adding a vanilla spice to the whisky.

In reading her notes, I felt like I was there at the session… even more so it transported me back to my Whisky Live Singapore tasting with Teeling’s Single Grain, Small Batch and Single Malt.

My Whisky Live Singapore tasting experience kicked off with a decided Irish air with a trio of whiskies from Dublin’s new Teeling distillery established near Walter Teeling’s old distillery from 1782.

Tasting notes are sparse as my approach was to sniff, sip and spit… then move on to the next dram. A sacrilege to many, but worked for me. Hence most of my scribbles are more impressions than proper tasting notes, providing more of a teaser of what is in store than proper evaluation. 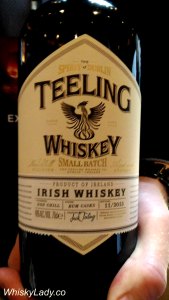 Like Loading...
Our May 2015 tasting session included three distinctly different whiskies from Scotland (Deanston), USA (Hudson) and this one from Ireland. As usual, we sampled it blind to reduce any influence of a particular brand or previous experience.

It was uncanny how after just a few sips, the chatter rose, sparked animated banter with amusing faffery. As a practice, we never re-pour during our initial tasting, however at first one, then another and another reached for the bottle to have just a wee bit more…

In a way, it was hard to pinpoint down precisely why it is such a likeable whisky. It isn’t sweet, isn’t spicey or smoky. It’s simply a most enjoyable dram with a decided “feel good factor.” It also re-inforced our overall positive take on Irish whiskies.
After airing – still yum however wouldn’t pair with food. Instead, this is a whisky to kick back and enjoy with a bunch of mates. Don’t expect wonders but do expect to have a rollicking good time! One I would consider adding to my cabinet if the opportunity arises… 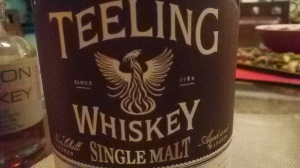 More about the whisky:

What others are saying: