Solera is the process of transferring part of maturing liquid from one barrel to another in a continuous rotation, typically used in making Sherry. In Australia, this method can be found in the making of Australia’s equivalent of Sherry – Apera – and now also in Starward’s “Solera” whisky which uses this system to bring consistency to each batch from their Apera barrels. As they put it, it also

“means that every Apera barrel we have ever emptied is in every bottle of STARWARD Solera.”

A few years ago, the Whisky Ladies were introduced to Starward with an early Solera version… and it was such a pleasure to try its newer avatar as part of a Starward trio…

We found it much more enjoyable than the “project”, easily accessible..

We weren’t sure whether water should or should not be divided.

After some time, we returned to be greeted by a delightful “cotton candy” aroma, still initially light but retained the substance. Delicious!

And what do the folks over at Starward have to say?

The original STARWARD is solely matured in Australian fortified wine barrels, which are hand selected, re-coopered, re-toasted and re-sized specifically for aging our spirit.

These barrels have formerly contained Apera, which is an Australian take on Spanish sherry. These barrels are 40-50 years old and have rich and complex flavours of dried fruit, spice and sweetness.

Here are a few other Starward’s explored:

Sherry’s effect on whisky can be a marvel. And I wanted to do something a bit different for our Bombay Malt & Cigar gents to push the boundaries beyond the known sherry drams like Aberlour, GlenDronach, Glenrothes, etc.

Normally we dive straight into whiskies, knowing what we are trying. However I wanted to have a bit of fun with a surprise…. So kept my fellow tasters “blind.”

Next, I introduced a “reference” pour.

I said nothing about it – merely to smell (not sip) with a request between each whisky to go back to the “reference” to recalibrate senses and compare.

It didn’t take long til they realized the “reference” wasn’t whisky at all but instead a sherry… with speculation it may be a “cream” or sweetened avatar rather than a dry fino or amontillado.

I later revealed that it was a Kingsgate Canadian sherry from KittlingRidge Ontario, Canada  described on the bottle as:

However this Kingsgate is now known as Apera with an explanation that it is medium dry Oloroso sherry “style” dessert wine. This 2013 nod from to EU regulations recognizes that a “true” Sherry can only come from the Spanish triangle.

Which tells you this funny little bottle, inherited from a friend who was leaving India, has been around for a few years…

As for what we tried? Not quite your usual fare… 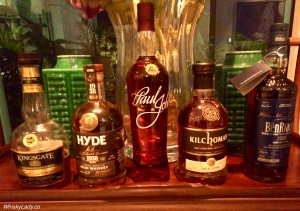 Here is the progression we explored with our Sherry Unusual evening with whiskies from Ireland, India and Islay…. plus an extra special single cask:

From Ireland, picked as an appetizer, the bottle stated it was finished in Sherry. What made it unusual is that it is a new brand, released to help promote the Hyde name before their Hibernia distillery in Cork is fully producing.

This was the biggest surprise – none imaged it could be from India! We were mighty impressed with what the folks from Paul John produced with four years in ex Bourbon then 3 years in ex Sherry casks. It also opened up beautifully with a bit of water.

A true class act. Selected just to be sure we had at least ONE proper single malt in our evening. Gorgeous and astounding how at 59.2%, not a drop of water was desired.

A pure peat monster tempered with 100% sherry from Islay. Not everyone’s tipple but certainly demonstrated how peat and sweet can combine!

Just click on the whisky links to find out even more about what we discovered!

Want even more Whisky Lady posts? Follow this blog on: