As Whisky Ladies, we enjoy celebrating the contributions of whisky women to the industry.

Rachel Barrie has a career that started with the Glenmorangie team, gaining experience to become a whisky creator and master blender for The Glenmorangie, The Scotch Malt Whisky Society, Moet Hennessy (LVMH) before joining Morrison Bowmore Distillers, Beam Suntory in 2011. As Master Blender, she described “Islay is my escape. There’s part of me that’s a free spirit and very elemental.” 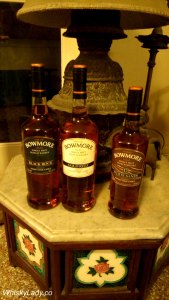 As Whisky Ladies, we thought it rather apt to have a session featuring whiskies where a professional Whisky woman was involved!

So we set about early 2016 to collectively acquire a ‘travel trilogy’ from Bowmore with:

For once, it was surprisingly easy to buy… the trick turned out to be finding an evening when all three ladies who purchased the bottles were `free on the same night!

This finally happened in April 2017… by which time Rachel Barrie had changed jobs and joined BenRiach and Glendronach Distillery Company as Whisky Maker.

Didn’t matter to us – we toasted her in spirit anyways!

Other Bowmore‘s tasted over the years include: