By now its a known factor of Irish whiskies that while new brands may have sprouted up all over, the “juice” is likely from Cooleys (aka Tyrconnell, Kilbeggan, Greenore, Connemara), Bushmills or Midleton (aka Jameson and all its variants). And while many have the desire to start their own distillery, until they have the wherewithal to do so, buy and bottle.

The story is a bit different with Dingle. In this case, the distillery makes their own pot still whiskey – with this their 3rd batch. They also make a quintuple distilled vodka and a London Dry style gin with mostly Kerry county ingredients – a smart way to start earning from their distillery while waiting for the whiskey.

In the aromas, initially the port influence was almost impossible to discern. However as it opened up, it became more apparent. Yet the palate didn’t reward… and the finish? Let’s just say if bitter and sour is your thing, then this one is for you… but for most of us? Nope, didn’t quite hit the mark.

So it was set aside to see if it gained any other elements or shifted after being open for an hour.

And what did we find? Not very different, still quite sour… just not happening for most of us. Gotta be honest, we had hoped for something more.

But like all things whisk(e)y, exploring and experimenting has its amazing rewards and a few disappointments too.

It could be said that Dingle was the first to open a new independent distillery in Ireland after 200 years… it definitely is not the last. Where Dingle is today could transform over the years… these are exceedingly early days given the first distillate was laid only in 2012 and the one we tried was the 3rd batch. So let’s see!

What do the folks at Dingle have to say?

Created by the marriage of meticulously selected casks,

A burst of blue/black fruits on the nose forms a tart almost jam like sweetness on the palate with some subtle notes of citrus peels, the liquid coats the mouth like warm honey, mixed berries and marmalade linger on the tongue.

As for what would it set you back? Well, if you picked it up at The Whisky Exchange like this one was, you could be looking at £75. 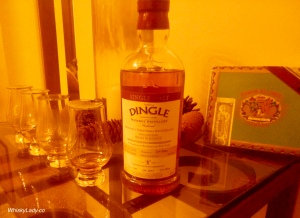 Here is what else we played with during our latest greatest Irish whiskey & cigars  evening:

Want even more Whisky Lady posts? Follow this blog on: