Our Nordic exploration continued with a special whisky created for The Box Whisky Festival 2015… available ONLY to attendees at the festival! (or those kindly given a sample from one such coveted bottles). 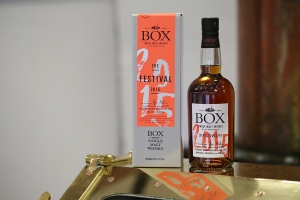 I had kept aside just a smidge in the wee 20ml bottle and revisited the next day… so glad that I did! Much of what I enjoyed came from the 2nd round which was sublime.

Overall it had an understated quality despite its initial boldness, with a harmony between nose, palate and finish. This is a whisky that requires you to sit, sip and savour. It cannot be ‘speed dated‘… it needs time to get to know you a little before it reveals its nature as quite an interesting dram.

Box Distilleri is very  distillery has to say:

For the Box Whisky Festival in 2014, we presented the world with our first festival whisky. This year’s edition is similar to its predecessor, with a distinct peat flavour and evident character of charred oak. One huge difference, however, is that all the casks are sized between 100 and 130 litres and that the age is somewhat higher – on an average four years. Two out of five casks are made from Swedish oak.

The bottling consists of whisky from five casks made from new American and Swedish oak.

The Festival 2015 is neither chill-filtered nor coloured.