We recently sampled a quartet of Paul John  whiskies from Goa, India. Before cracking open the 4th whisky, we tried:

The notes are from two sampling sessions. The 1st points are from when the bottle was initially opened, the balance from the 2nd tasting session. 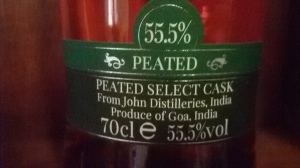 While there is peat, it is a light not heavy hand – teasing rather than clobbering you over the head. It is definitely the kind of whisky the grows on you more and more.

Interestingly some who initially voted Paul John Classic as their favourite over the course of the evening found themselves drawn back to the Peated. It even made a convert out of one who tends to prefers non-peated whiskies.

Here is what Paul John has to say about Peated:

Experience the many notes and shades of Goa here…

The Paul John Select Cask Peated gently astonishes the seriously indulgent. The swirl lightly whisks up narratives from the undulating landscapes of the windswept oceanfronts of Goa.

The smoke slowly blows forward and acts as a cushion to the many layers of crisp sugars, muscovado and demerrara. A hint of spice radiates from the hickory and Dominican-style cocoa.

That’s the Goa experience in a tipple.

There is clearly a distinctive quality to all four Paul John whiskies. Each has a kind of tropical ‘sunshine’ with a range of sweet to bitter to spicy and, for Edited and Peated, smokey elements.

It is refreshing they are from India and while all are quite enjoyable single malts, the Select Cask Classic and Peated are the ones appreciated the most.

A welcome newer voice in the world of whiskies and growing pride from India.

What others are saying:

It is very unusual for our single malt tasting team to try a whisky more than once within the space of a few months.

However that is exactly what happened with Paul John Edited from John Distilleries in Goa.

We managed to sample it on no less than three occasions:

The reason for trying so many times is we were treated to a Paul John quartet which featured:

It was a delightful treat to be able to compare four expressions from the same distillery. And while Edited kick-started the John Distilleries tasting journey, it truly was just the gate-opener to one of India’s single malt distilleries. There is something distinctly ‘different’ and while hitting ‘home runs’ quite yet, it sure seems that Paul John is on the right track…

So here goes yet more impressions – focused only on reactions to the 2nd bottle.

While peat has been added to Edited, it is with a light hand –  there but after the welcome more the impression of mild peat than prominence.

Overall those who sampled it originally in January confirmed it showed promise, however both Brilliance and Edited were completely eclipsed by their cask strength cousins Paul John Classic and Peated. It is with these that a ‘Paul John character’ starts to emerge.

Here is what John Paul says about Edited:

This is where you taste the sea off Goa.

This masterfully crafted Indian Single Malt Whisky brings to the fore a hint of peat, created from discretely chosen cask profiles to delight the ardent malt drinker. Grassy barley shows first, but then slowly makes way for their gentle peat notes. They dissolve into the palate and begins to build momentum and intensity.

Slow down now to a chocolate mint and mocha rush, as well as a sublime molasses note that overwhelms you with a sweet end.

Dreams are made of this.

Only during the March tasting did we read the Paul John descriptions after we sampled the whisky. They may not tell you much about the whisky but are amusingly descriptive of the feel the whisky is trying to evoke.

While I remain more curious about what else Paul John has in store, this is the only of the quartet to survive the tasting sessions so I will have the luxury of re-sampling it solo one of these days when the mood hits. That isn’t such a bad thing…

What others are saying about Paul John Edited:

Every once in a while our merry monthly malt group breaks with our sacrosanct meeting approach to throw ‘open’ our doors to a sociable evening with better halves. As luck would have it – we managed a full house this month!

The motivation for the evening was a delightful ‘score’ from a recent trip to Goa… With 4 lovely bright bottles of India’s Paul John single malts distilled in sunny Goa, how could we resist?

While John Distilleries has been around in India since 1992, their first Paul John single malt was launched only in late 2012 in the UK. Now a few are available in India (Goa!) and it was a rare treat to try four expressions from the same distillery!

We sampled in the above order – without reading the distillery tasting notes.

Then my partner read out in his rich baritone the Paul John whisky descriptions… let’s just say they are unlike any notes we’ve seen!

All are distilled in copper pot stills and while ‘NAS’ are understood to be matured for 4-5 years in ex-bourbon casks. As I keep being reminded, whiskies matured in warm… ok let’s admit it HOT climes (in the case of Goa) have an accelerated maturation cycle and heightened ‘angels share’ loss. However when done right in such conditions, the whisky sipper is the ultimate beneficiary! 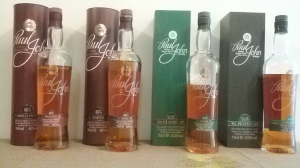 An immediate indicator of preference is the quantity consumed. After the initial pour, the bottles are available for further enjoyment. You can immediately see Classic was ‘tops’, followed by Peated then Brilliance. In fairness to Edited, we tried it earlier so a couple of late-comers skipped the sample.

Tasting notes links provided above however overall had the following observations:

It would be interesting to compare the Paul John expressions side-by-side with Amrut – such as their entry-level single malt or Peated. Based on our recent experience with Amrut, suspect Paul John would come out ahead. However a ‘blind’ head-to-head would still be an enlightening experiment! Particularly as within our group are a range of palate preferences.

Regardless, how fabulous that India is now producing REAL single malts not just the mass-produced blended ‘whisky’ which is often coloured spirits masquerading as whisky.

“An interesting work in progress!”

And we look forward to seeing what more is to come!

The real test for me?

I think a Paul John just might join an upcoming trip to Canada end June. My Aunt and Uncle have a whisky tasting club. They also quite enjoyed their time in Goa a few years ago…. So bringing a whisky taste of Goa to Canada sounds like a perfect gift!

What others are saying about Paul John:

PS – Wanna see what the Whisky Ladies of Mumbai had to say about Paul John?