At various international airports, I’ve spotted Iwai Traditional and its cousin Mars Maltage “Cosmo” a few times… And not to scoff at reasonably priced blends, it just never quite made it into the final “cut” to come into Mumbai, India. 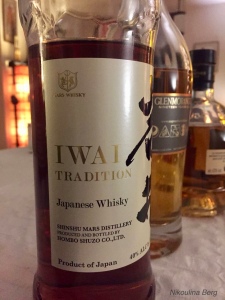 Now our Whisky Ladies are accustomed to higher strength drams, so it is no surprise several remarked that this seemed to be quite “watered down.”

We expected a pleasant appetizer whisky like Akashi Red Blended Whisky which we had dubbed the “apple cider” whisky. Yet somehow that had no pretence of being more and hence was somehow more enjoyable in its uncomplicated way.

What do we know about this whisky? Not much… except that it is apparently a blend of sherry, bourbon and wine casks with a bit of peat. Alas, I could not track down official tasting notes in English…

The Mars Hombo company is not new to the spirits industry and added whisky to their repertoire in 1949. In 1985, they opened their Shinshu distillery – producing whisky under the Mars label. This distillery at Shinshu, Kuyshu Island, Nagano Prefecture is thought to be the highest in Japan (even more so than Hakushu). More recently, the company is opening a new distillery in Kagoshima, Tsunuki.

What else did we sample in our “Contributor’s Choice” evening?