So… what was the whisky recommended at Toad in the Hole pub’s Whisky Bar? A limited release BenRiach sold only in Manitoba at our provincial liquor mart.

Yup… you read that correctly. The independent whisky makers over at the BenRiach distillery decided Manitobans deserved their very own cask #44016. 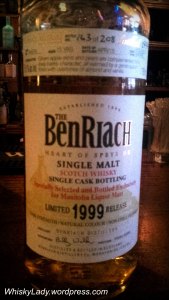 The only problem? It was gone too quickly!

On the bottle, it was described as:

Green apple skins and pears complemented by a lively barley character, all warmed by a gentle spice finish with overtones of almond and vanilla.

Here is what the Manitoba Liquor Mart has to say:

EXCLUSIVE to Manitoba Liquor Mart! This specially selected product has been resting in a first-fill Bourbon cask in the famed Scottish Speyside region from 1999 until its bottling in April, 2015. On the nose a sweet floral oak note explodes to heather-honey, lemon, apples and poached pears, all of which is surrounded by the richness of dark vanilla pod, toasted coconut and notes of crème brûlée. On the palate, green apple skins and pears are complemented by a lively barley character, all warmed by a gentle spice finish with overtones of almond and vanilla.

As for me? Very happy to have the privilege of sampling this dram!

An old familiar watering hole of Winnipeg is The Toad in the Hole Pub & Eatery, where you can count on playing darts, wolfing down yorkshire pudding, bangers and mash, possibly catch an amusing celtic band and generally have a good sociable time.

As an old Winnipeger, I have spent more than my fair share of evenings at the Toad. And while much has remained the same, there are changes too… most notably an adjoining whisky bar… as in an entire room paying homage to the water of life!

How could I resist?

Alas we reached before the whisky bar’s official opening hour of 9 PM so instead perused the whisky list book and randomly ordered one I hadn’t yet tried – Tullibardine 20 year 43% – described as well aged with vanilla, cocoa and honey.

Nope. Simply not my dram. Didn’t even finish it.

I instead found myself nipping into my companion’s whisky. As we were about to drain the last drop (of hers!) and carry on our merry way, we were informed the Whisky Bar was now open and would we like to pop over?

The doors opened to the hallowed halls… everywhere your eye landed was whisky… from shelves lining the walls with whisky bottles and boxes to the focal point of the room – a full floor to ceiling stock of whiskies behind the bar.

The Winnipeg whisky bar’s pride and joy is the ladder which slides across the wall of whiskies to help select the preferred dram. It harkens back to an earlier time with precious dusty tomes (or in this case whisky) well beyond easy reach could be access only by the ladder.

A suitable metaphor since the biggest advantage of a well-stocked whisky bar is an opportunity to try just one dram many of a whisky well beyond your reach for a full bottle!

The venerable ‘bar-keep’ kept up a merry conversation with us regarding their whisky collection and journey since opening in 2012 in between whipping up cocktail after cocktail.

The only problem with this whisky? It was gone too quickly!

Most amusing was when he brought out an aroma kit with its samples from balsamic to decay… ugh! My companions took a whiff, I was not about to destroy my dram by assaulting my olfactory senses.

It was interesting to see one of these kits though which are touted as helping hone your ability to discern different elements in a whisky. Me? I’m quite happy with my novice impressions!

If you happen to find yourself in Winnipeg and are craving an environment that stocks a decent collection with a knowledgeable whisky guy, go no further!

You will find the Whisky Bar in the heart of Winnipeg’s Osborne Village: