Next up in our Nordic Explorer‘s session was a whisky from Denmark’s Stauning distillery.

Stauning was founded in 2005 by nine whisky enthusiasts in western Denmark with a dram to make a Danish dram that uses locally sourced grain, locally malted and, where relevant, using Danish peat.  Encouraged by a meeting with Jim Murray and his positive reviews of their early results, the team bought a farm near Staining and built new premises in 2009. 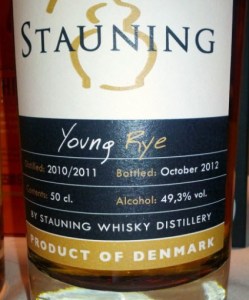 Perhaps it is just that my Nordic whisky lady companion and I are simply not partial to rye whiskies or perhaps it was just that after the fabulous Teerenpeli Kaski, the Stauning Young Rye didn’t even come close to measuring up.

It reminded both of us of the slightly peculiar grain experiments we recently tried from AD Laws – Triticum and Hordeum. Neither were to our taste. Perhaps a rye fan would find other elements we missed… That’s all part of the range of whiskies that appeal to different palates and preferences.

Here are the folks at Stauning have to say:

A fascinating journey so far with our Nordic whisky experiences:

With only one more to go, our Nordic whisky adventures are nearly over…