Next up in our “out of the ordinary” North American evening was a return to AD Laws. A few months ago, we sampled their core AD Laws Four Grain Bourbon – enjoying its robust character.

So when an opportunity arose to try a pair of their grain experiments, thought why not?

When this bottle was pulled out and the type of wheat declared… speculation ran rife that triticum just might be the grain mentioned in Star Trek’s “Trouble with tribbles“… Turns out it was triticale – which is a hybrid of triticum wheat and secale rye. Bravo for our Star Trek trivia lady! And amusingly, the AD Laws folks also have a Secale Straight Rye too. 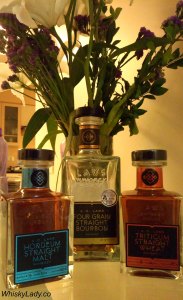 What did our ladies think?

Overall we found it exceedingly rustic. Like returning to farm life.

One lady reached for taco chips and found the salt mixed well with the grainy quality of the whisky.

Another joked that this is the kind of whisky that… if it was a blind date, at some point you politely excuse yourself to go to the washroom… and escape without returning!

One wondered… if tribbles had got into this triticum wheat, would they have so rapidly bred and multiplied?

Needless to say, while we admired the ingenuity and effort to craft something unique, we were underwhelmed by the result.

In their recommendations of how best to sample the Triticum, the bottle notes to have with a splash of water and cube ice. Wanting to give it another chance, I tried just this the next day at home.

What did I think? A significant improvement. Sunshine and honey sweetness with the overwhelming grainy quality subdued. Not such a bad recommendation.

Here is what the folks over at AD Laws have to say about their Triticum:

A.D. Laws Straight Triticum (Trit-e-come) Whiskey is our homage to wheat, the “Grain of Civilization.” Skillfully mashed, fermented and distilled to accentuate the welcoming character of this high-mountain, Colorado-grown wheat, Triticum is exceptionally smooth and approachable with fruit, caramel and baking spice notes.

There are apparently two recipes:

We sampled Recipe B and our bottle indicated it was aged for 2 not 3 years.

What all did we try in our “out of ordinary” evening?