From Speyside-Bogie & Deveron, we next tried a single cask from Dailuaine, selected and bottled by The Whisky Warehouse No. 8. You may note that my wee sample looks a bit ‘frosty’. This is because I was sipping in our country home outside of Mumbai, India with the temperature outside a “mere” 32′ celsius… so I had put my samples in the fridge to chill a bit before I sat down with my tasting companions who virtually joined from Paris, France. 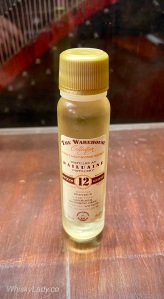 What a contrast from the Auchentoshan and Linkwood! Imagine going from a perfumery to a fishing trawl! And on the palate? Let’s just say it was far more mellow than we expected at 61.5%!

We thought this one could open up with water, so gave it a go! Yes after initially cranking up the spice, it settled down, revealed some toffee and caramel cream, more of the vanilla pod… but in truth we were a bit ambivalent about water in this one. If anything, it had more character at cask strength!

We continued on to our 4th dram in the set and returned to the Dailuaine after some time. It initially had a peculiar sour cleaning aroma however after a sip, the aromas again shifted… that said we certainly found the palate its best feature.

I reflected back on other Dailuaine’s I’ve sampled and simply must admit while this style of whisky has its place, it isn’t a favourite of mine – at least their ex bourbon casks. That said, I did enjoy the Dailuaine 11 year sherry cask Dailuaine bottled by Gordon & MacPhail, so perhaps a bit sherry cask would – for me at least – suit this spirit better.

Here is what the bottlers have to say:

There are only a few single malt bottlings from the Speyside distillery in Dailuaine, which is beautifully situated in the countryside. The distillery only brings out a handful of original bottlings.

In addition, a number of independent bottlers, who appreciate the special quality of Dailuaine whiskeys, fill one or the other barrel. Only about two percent of the whiskey produced by Dailuaine is marketed as single malt, the rest is mainly used for the blended whiskey Johnnie Walker. We had this single malt rarity Dailuaine stored in a Garrison Bourbon barrel. The specialty of these barrels is their size of just 60 l, which accelerates the maturation process due to the small size.

The vanilla aromas of this bourbon barrel storage are intensified. The disadvantage of these barrels is their availability. There are only 72 bottles of the already rare Dailuaine single malt scotch whiskey.

Overall what did we think? It was worth trying but wasn’t the ‘hit’ of the evening which was clearly the Linkwood with a bit of competition for the ‘runner up’. 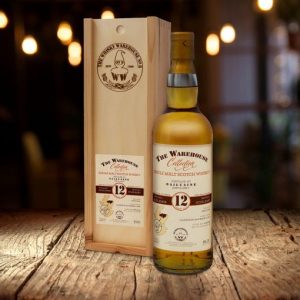 What else did we try from The Whisky Warehouse No 8?

As for other brushes with this distillery?