Last in our experimental evening was another whisky you don’t often get to try as a single malt. If you are Johnnie Walker fan, you’ve had Dailuaine without even realizing it!

The folks over at Diageo describe Dailuaine as a “A complex whisky that can impress mightily.” Considered a Diageo ‘workhorses’, the distillery name is taken from the gaelic ‘dail uaine’ meaning green valley.

However you won’t often find this whisky outside of independent bottlers. Currently there is only the Dailuaine 16 year, part of the Flora and Fauna series, available as an official bottling. 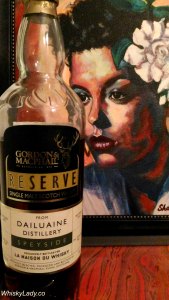 We sampled it blind… and what did we find?

This one took time to fully open up and reveal all its secrets. A completely sinful desert so rich that just a small spoonful satisfies.

In describing drams from this distillery, Diageo shares:

This is not just an after dinner dram, it’s an after-dinner mood in a liquid. Thick, rich yet pleasantly, palate-cleansingly sweet. Try Dailuaine whisky with the cheese course, or just nose the cheese rind, fruit and citrus aromas hidden in its depths.

Would we agree? Yes. It was a wonderful close to our experimental evening that also featured:

You can also find Whisky Lady (in India) on: