Once upon a time there was a Linkwood that was poured into a bottle in 2012… to make its way from Scotland to a World of Whisky store to a home in Mumbai, India. And then find its way into our glasses in October 2018…

We sampled it blind and here is what we found… 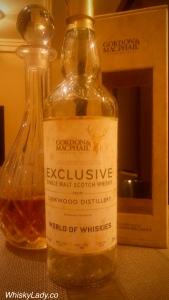 We struggled with this one… it seemed oddly incomplete or off… something or other wasn’t quite right. Over and over we kept remarking on the peculiar musty element.

With the reveal we were all surprised.

Really?? The character wasn’t in keeping with our past experience with Linkwood whiskies and certainly not Gordon & Macphail bottles.

And that is when our host revealed that the reason he served this single malt from a lovely decanter was the cork had crumbled completely. He further shared he had purchased this years ago – likely not long after it was released in 2012.

It seemed that tragedy had struck. What could have once been a fine dram was given no favours by being stored in a Mumbai cupboard for years. There actually have been studies on the impact of storage conditions on whisky bottles. Mumbai’s heat isn’t kind to bottles… and this seems to have happened in this case. Sigh….

What about other Linkwood experiences?

Our original tasting group continued in our “classic” evening with two other Scottish single malts:

Don’t want to miss any Whisky Lady posts? Follow this blog on: