First we sampled it blind, then we had it in a specially crafted cocktail. 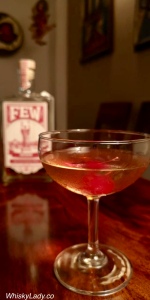 While it came across as a bit soft and thin, there was still plenty going on. For the bourbon fans in the room, there was no doubt this was a fine specimen. Too soon our wee snifters with just a few sips were empty and it was time to move on to the next…

But this wasn’t it for us! No siree! After the teasing sample, out came one really quite fabulous Manhattan.

What do the folks at FEW have to say about their Bourbon?

This spirit, distilled through timeless liquor-making techniques, utilizes a three-grain recipe that infuses generations of Southern tradition with the spiciness of northern rye and a touch of malt for smoothness. FEW is hand-crafted through a small-batch process in charred oak barrels to age its bourbon whiskey.

In a terrific twist, FEW Spirits takes their name from Frances Elizabeth Willard, a key figure in the Temperance Movement, The craft distillery is based in Evanston which has seen its fair share of Prohibition…. which sparked the creation of a remarkable array of illicit liquor plus import of Canadian rye whisky that was sometimes so harsh it had to be mixed up with various ingredients… making way for the famous flapper accoutrement – the cocktail!