When Crown Royal’s Northern Harvest Rye sky rocketed from obscurity to celebrity hood… it was hard to believe my home province of Manitoba produced a dram that flew off the shelves around the world.

While rumour had it the original idea was to have it be a ‘one time thing’ (though high volume), given its popularity it didn’t take long for Crown Royal to pump out more.

And this particular bottle? While I can’t guarantee its from the same batch that led to it becoming the World’s Best Whisky of 2016, it certainly is from around that time and purchased in Manitoba… 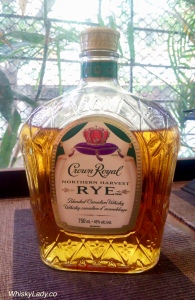 So what did we think?

We hadn’t thought we would find this whisky so interesting – yet every minute the aromas shifted. We all found it most enjoyable… even those who tried Northern Harvest Rye previously were pleasantly surprised.

And as a start to our evening? A perfect pick!

Pst My father picked this up in Winnipeg for under $40.

What else did we have in our “O Canada” 150th Celebration?