Let’s be honest, if you are anything like me, after opening a bottle for a tasting session, most tend to get set aside – either as it was so special it is carefully kept to share at some mythical future moment, it was too much of an experiment to want to repeat, it was stored in some deep dark inaccessible corner, or the mood to try again simply didn’t strike.

It may seem strange that someone who enjoys exploring whiskies isn’t really a ‘drinker’. But the truth is, I don’t sit around having a dram each night. Which means I’ve been known to keep an open whisky bottle for months, nay years!

So when I thought we’d have to move from our beloved Bandra flat in Bombay, realized it was high time to purge possessions and reduce clutter. That the move has been postponed a few years is irrelevant to this tale.

What matters is it prompted operation ‘clean house’ – whisky style! Now… as you can imagine… I have a rather motley collection of malts. More than the large bottles, there are all the partly finished miniatures and samples to contend with… which means no ordinary sociable evening would suffice.

Here then is my wee recipe for successfully roping in comrades to give generously of their time (and livers) to make a dent in your ‘dram dregs.’

Unlike a proper planned tasting, dram dregs need a bit of a ‘statutory warning’ as can have a few massive misses along with the hits. You may find a few precious carefully stored whiskies stood the test of time… but others may have tragic consequences and be nothing like their former glory.

Your partners in crime need to be game for the highs, lows and sometimes getting only a whisky teaser not a proper snifter. This is no normal ‘tasting session’ but instead a palate twister of unique proportions.

Step 2 – Start with a few oldies but goodies – even if only a sample sip!

Our 1st ‘operation clean house’ evening began with assorted half sampled minis… In most cases it was at best 1 to 2 sips per whisky. I do believe we managed to empty about 8 or 9 half empty mini bottles… many of which were more unusual and rarer items.

Step 3 – Cautiously check the suspect ones…

My Canadian stashes – both 2015 and 2016 – were all opened, sniffed, even sipped and then summarily dumped! Narry a one was truly drinkable. Lesson learned – never ever store whiskies in jars!!!

I had already brought out from my whisky cupboard all the mid to full size open bottles so they were accessible for emptying.

In our 1st session we selected the Blair Athol 27 year (stood up well!) and the “Highland Heart” (did not… an odd shadow of its former self) – each having at best a dram or two. A not so gentle reminder that oxidation takes its toll… for quality drams, using a vacu vin stopper seems the way to go!!

Don’t try to do everything at once. After our 1st session where we tried over a dozen dram dregs, we decided to be a bit less ambitious in our next round. Less is more. 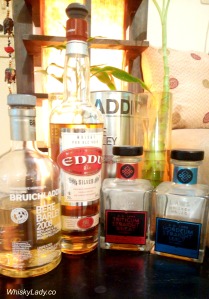 I’m considering a few different nights with one or two folks: