The 1980s was a time of pac-man, tetris, Apple computers, big chunky jewellery, hair that defied gravity, caked on make-up, and some very bad pop hits.

For some of us, the 1980s was also a time where we shouted “ban the bomb” and “anhilitate apartheid!”, where we stood firm with our brethren in Tiananmen Square, the Palestinian intifada, watched the wall come down and yes… had funky spiked hair, grunge clothes and hung out at punk rock gigs.

If you haven’t figured out which camp I belonged to… pop over to Everyday Asia and check out the photographic evidence in “How I got ‘hooked’ on going away.”

However, the 1980s didn’t happen to be a time that I could afford whisky! I was far too deeply buried into heavy academic tomes to surface to sniff, swirl, swish and swallow a single malt.

Rumour has it that the 1980s happened to produce many rather good drams. More than a few whisky experts around the globe speak of how whisky styles have changed between ‘then’ and ‘now’, noting that with the increased demand for single malt growing globally, production methods, quality controls and shifts in palates have created differences in whiskies produced 30+ years ago with those matured today.

After sampling the remarkable Glendronach grand dames and then the rare Karuizawa 39 year from 1973 with whisky stock laid in the early 1970s, we had another exceptional evening that sampled whiskies from the 1980s… There is indeed something ‘different’ about these drams! 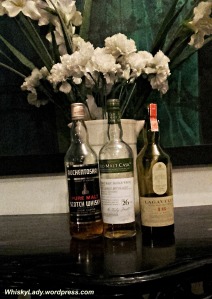 You can also find Whisky Lady in India at: