As part of reflecting back on the last five years and 1,000 whisky posts, I’m amused by the top 5 whisky posts… that may perplex for their popularity.

Yup… for a whisky that I’ve purchased only once and had a few times at parties.

However it definately falls into the “populist” category of accessible, affordable Indian blends.

It has a really crappy photo – which may be contributing to its popularity as it seems a ‘wine shop’ in India has co-opted the image!

On my next trip back to India I may buy a bottle just to take better pictures and bring it back to Germany for the novelty factor. 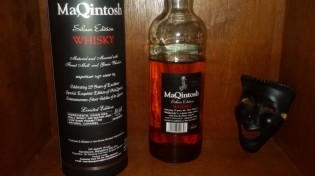 Another whisky you won’t see my running out to buy anytime soon! Why does it stand out? I suspect it is the combination of being 20 years, available at most duty free for a cheaper price and our completely panning it a few years ago when we tasted it side-by-side a 3 year old Japanese whisky.

I suspect this rides on the back of increasing interest in Irish whiskies… and for some reason it “peaked” in popularity in 2018!

No tasting notes, just putting out to the blogosphere my quandary – to open a bottle purchased in 2014…

Thanks to Ronald Ding of Whiskyrific, I did get a chance to try a sample! And concluded it probably wasn’t worth hanging on to… Fast forward a few years and it seems I have company in that final conclusion as the popularity of this whisky waned and auction prices are flat. I probably paid more at Singapore duty free than you could get it today in the UK.

I haven’t yet opened the KinInvie only as had planned a session with the Whisky Ladies to deconstruct a popular vatted malt – Monkey Shoulder. At the time, Monkey Shoulder was a vatted malt bringing together Balvenie, Glenfiddich and Kininvie. Unfortunately the recipe has now changed and all my old Monkey Shoulder bottles were long since consumed in past parties.

Hence the KinInvie still lies waiting for the right opportunity to open!

Remember #2 where a 20 year old was outclassed by a mere 3 year old toddler? This was the young upstart. No surprise it seems to be more the ‘battle’ between young and old than the reviews themselves that stand out.

As these are “All time” popular posts since starting this blog in October 2014… They pretty much all have crappy photos. And if the lense is shifted to look at only in the last year, except for the MaQintosh, different posts sparked attention.