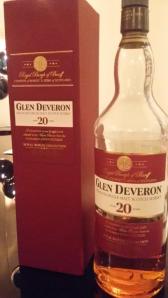 On this evening, our whiskies were carefully ordered by age – 3 year, 16 year and closed  with this 20 year.

Reactions – Oddly disappointing… perhaps as the Blair Athol 16 year had such an unmistakable character or the Chichibu ‘The Floor Malted’ 3 year was such an interesting start, the Glen Deveron didn’t stand out. The nose was promising, taste was somewhat familiar and the finish had more of that toothpaste mint than a fresh sprig.

The reveal – None had thought it was 20 year… with such an age, it is entirely possible the colour is natural. However goes to show our minds came to different conclusions based on our experience with the whisky which simply did not have the complexity and depth we seek in more mature whiskies.

While I initially blithely listed this as “Glen Deveron” distillery, turns out it is actually part of Macduff distillery, which was acquired by William Lawson Distillers, which became part of the Martini & Rossi corporation in 1980, acquired by Bacardi in 1992, who put their subsidiary John Dewar & Sons in charge of the Macduff distillery. So… think I’ll stick with calling it Macduff?!

So… this release from Macduff distillery is part of their Royal Burgh of Banff Collection with 16, 20 and 30 year releases for the duty-free market. 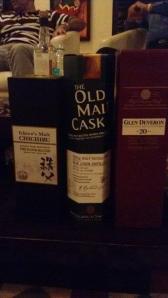 So does age really matter? At the hands of a master, apparently a mere 3-year-old ‘toddler’ can out-class a 20-year-old ‘adult’!

For those curious to read more about the other whiskies: