Einar is part of Highland Park’s warrior series – created for duty free with a figure from Orkney’s Viking history. 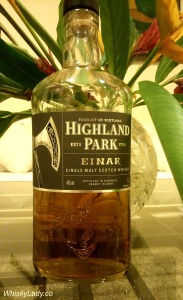 Overall it was easy to drink, enough sweet and light peat to be Highland Park, but for us, it clearly fell into the category of Duty Free No Age Statement (NAS) palate or, to use our newly coined term, was quite “NASPy“.

Here is what the folks over at Highland Park have to say:

The joint Earl of Orkney from 1014, EINAR was a bold and ruthless warrior and ruler, renowned for venturing on long and daring voyages and clearly distinguishable by his mighty axe.

I sampled it initially from a freshly opened bottle in a social context in August, then later with friends in September 2017 from a mini sample taken from the same bottle.