Relatively early in my whisky sipping days, I was introduced to Highland Park’s 18 year by a dear friend. It was one whisky I kept returning to savour and enjoy – most often with the very same friend. That whisky and I have some good memories.

Along the way, I also tried other Highland Park options too :

Yet my favourite remained the 18 year which to me had a delightful balance – a complex nose, full-bodied palate with a finish that lovingly lingered. Add a dash of water and a whole new world of flavours opened up. It had enough going on to keep coming back…

Most important, the 18 year fit into my ‘pinch’ not ‘yeouch!’ pricing category and was easily accessible at Singapore’s Changi airport to grab when passing through en route home to Mumbai.

And then the year based approach took over – bottles of this Orkney offering were found in labels of 1998, 1994 and 1990 – with a sharp price jump – especially the older options.

Sceptical, I decided to start with the Highland Park 1998. The one I picked up was bottled in 2011 – making it almost equivalent to the 12 year.

I cracked it open, sampled and sighed… in disappointment. Not even up to my memory of the earlier 12 year.

And here I will admit… I dismissed it, forgot about it. I didn’t even offer it as a sample at our monthly whisky sessions as didn’t think it worthy. It joined the league of left overs that would be available at social evenings for less discerning palates.

However in dusting my whisky cabinet the other day, I decided to revisit. After all… it is not improving with age just sitting there and perhaps – just perhaps – I may have been a bit too harsh in my initial assessment. 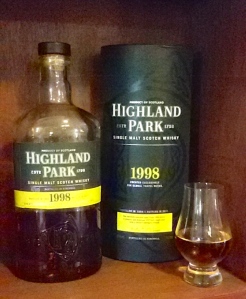 In fairness, one really should not rely on tasting from bottles opened ages (years!) ago. However while it still lacks a certain quality that makes a truly superb single malt such a marvel, it isn’t a bad dram. It just isn’t a particularly good dram.

Perhaps I was just a wee bit harsh in my initial assessment.

A little more info: Aged in sherry oak casks from Spain. According to the label, the colour is natural.

PS. Interesting that most reviews seem to be of a version bottled in 2010 however unless the label on mine is a typo, it was a year later!