And now the last of our “Speed Tasting” drams, in an evening where we sampled blind five different drams with just 2-3 minutes each…

What were my hasty impressions of Dram “E”?

This one was quite “hot” and young. It was a bit like a “3 in 1” whisky with its different dimensions.

Midleton distillery produces Jameson, with only a few official bottlings under the Midleton name.  Dair Ghaelach is a single pot still whiskey that was aged initially in refill American oak for between 15 and 22 years and then finished for a year in virgin Irish oak from a single tree.

There are different editions, so what we sampled was different than Jim Murray’s 3rd best whisky in the world for 2016 which was 58.1%, tree not specified. Whereas ours was a different batch from Tree 9 at 58.2%. 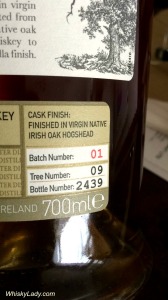 However just for kicks, let’s see what Mr Murray had to say about it: