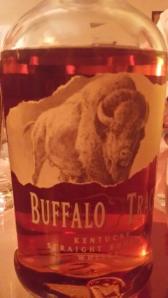 As usual, we sampled blind then revealed the whiskey… Here is what we found:

Debate: Some preferred the WL Weller, another thought the Buffalo Trace had more character…

Here’s what the folks over at Buffalo Trace have to say:

Ancient buffalo carved paths through the wilderness that led American pioneers and explorers to new frontiers. One such trail led to the banks of the Kentucky River where Buffalo Trace Distillery has been making bourbon whiskey the same way for more than 200 years. In tribute to the mighty buffalo and the rugged, independent spirit of the pioneers who followed them, we created our signature Buffalo Trace Kentucky Straight Bourbon Whiskey.

This deep amber whiskey has a complex aroma of vanilla, mint and molasses. Pleasantly sweet to the taste with notes of brown sugar and spice that give way to oak, toffee, dark fruit and anise. This whiskey finishes long and smooth with serious depth.

Here’s what others have to say about Buffalo Trace:

Other whiskies in our Kentucky bourbon evening included:

It was an interesting departure to take a little tipple trip to Kentucky.