Next up, a trip to Tennessee with a whisky from Corsair…. These folks are all about experimentation… Starting with beer, Darek Bell and Andrew Webber founded Corsair Distillery in Bowling Green, Kentucky in 2008. Two years later, Corsair shifted and became the first craft distillery in Nashville since prohibition, since expanding to two centres – both beer and spirits.

I first encountered Corsair in 2015 with their Triple Smoke… which happens to make a great old fashioned.

So, what about the Hydra? 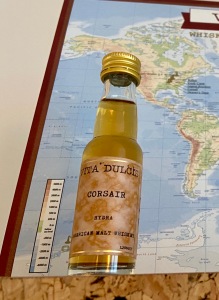 Increasingly interesting as I sipped…. it was distinctly different. Clearly not Scottish and not a typical bourbon either. There is a freshness to the aroma. An interesting array of wood elements… came across as well crafted.

To be honest, I knew nothing about this before tasting…. just dove in ‘nearly’ blind.

What could I find out?

And distillery official tasting notes? They are no longer included in their website as this was an expression from 2018, but rumour has it that their description was simple:

If you are interested in finding out more, I’d recommend checking out Whisky Jason’s video comparing Hydra and Triple Smoke in English or German.

Curious about other minis tried in December 2020? Check out how far I’ve reached in my journey through the Vita Dulcis 2020 Advent Calendar.