Sound it out… “Aird Mhor” and you realize perhaps this might be “Ardmore”… and sure enough it is!

Our Whisky Ladies session dove straight into this cask strength offering from the Single Malts of Scotland range bottled by Speciality Drinks. It was purchased at their Whisky Exchange Covent Garden store under the guidance of Duncan.

So what did we think?

This one was a bit curious and not for everyone. Going straight from zero to full cask strength was also an adjustment.. though one our Whisky Ladies can easily make!

One remarked this whisky was a bit of an “attention seeker” with a fierceness and forcefulness that demanded notice. In this respect, it showed its youthful enthusiasm.

We discovered that the hint of Laphroaig peat came from the Ardmore being matured in ex Laphroaig barrel.

It wasn’t complicated and yet it provoked a clear divide between those who enjoyed and those who didn’t care for it so much.

Apparently Mogambo also has something to say! 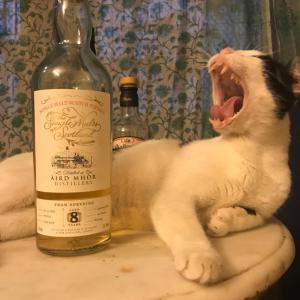 What did the folks at The Whisky Exchange have to say?

A smoky dram from Aird Mhor (aka Ardmore distillery). While nearby distilleries are better known for unpeated whisky, Ardmore bucks the trend, making a powerful and smoky dram. This single-cask bottling from The Single Malts of Scotland – distilled on 1 December 2009 and bottled at years old on 25 June 2018 – is a classic, with punchy smoke, honey and lemon.

I must say, I rather think “punchy smoke, honey and lemon” is a rather good way to describe this one!

What else did we sample in our Whisky Ladies Peaty Highland drams evening?

And what else have I explored from Ardmore?