After some experimental whiskies from Australia and New Zealand, it was time to turn to one we had high hopes would satisfy our craving for something a bit more complex and perhaps even a bit more classic…

Based in Tasmania, Sullivans Cove is one of the distilleries that put Australian whiskies on the world map. And with good reason.

There is a certain elegance to this whisky. It is both classic and modern. What we also remarked is that though only 40%, this was a proper full whisky that left nothing out.

Here is what the Sullivans Cove have to say about their Double Cask, appreciating there is variation between editions: 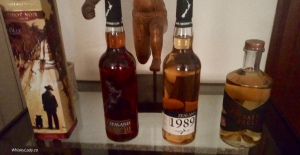 So what else made it into our “Trans Tasman” explorations?

Curious about more? Check out the Australia and New Zealand section in the Asia Pacific whiskies page.