Exactly two years ago, the 1st batch of Bunnahabhain Eirigh na Greine 46.3%   was part of an interesting Islay trio together with the rather original Bruichladdich The Organic Scottish Barley 50% and quite memorable Caol Ila 1997 (bottled 2009) 43% by Gordon & MacPhail.

Then, same as now, we sampled completely blind before the whisky was revealed. None of us could have guessed our host would repeat… 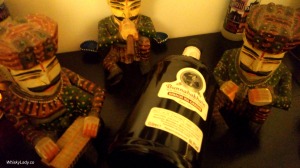 For two of us, the initial sense was akin to Irish pot still but then the tobacco quality tipped the scales towards something else entirely. We struggled with this one – it clearly wasn’t a standard Speyside, just as it wasn’t an ordinary Islay… speculation ran rife but none could guess. At best, we could comfortably peg it as NAS, young yet delicate.

The reveal was a complete surprise.

It has natural colour and is unchill filtered, matured in ex-red wine casks.

Just to compare, what did we find years ago with Batch 1:

We compared it with the official tasting notes and were somewhat puzzled….

Our Master Distiller has perfected the recipe to ensure that Bunnahabhain’s signature taste, which includes roasted nuts and fruits with hints of sea salt and smoke, is further enhanced by sweet, rich and spicy aromas imparted by the Italian and French red wine influence.

The nose we could see where it came from but missed the very yoghurty quality we found weaving in and out, rather prominently at times – with it being more sour fermented dosa paste in the 1st case and clear yoghurt in the 2nd. I suppose I could even accept a bit of cherries, cocoa and spicy oakiness… but orange marmalade? Apricots? And none of the other qualities we found…?

The 1st batch more clearly had a wine-like dimension whereas the 5th batch had that hint of peat with the tobacco dimension. Clearly batches make a difference. And why not?

This whisky was purchased by our club member from Singapore duty free. It sells for approx USD 75 through Master of Malt.

What did we sample with our Islay trio?