Yes another Paul John post, however it is such a treat to be able to share this tropical delight from Goa, India in my country of birth – Canada!

Here’s a few impressions from the Canadian evening with a bottle from the 2016 batch:

Now my companions must have wondered a bit as I kept (annoyingly) going on about “where’s the delicious bacon??” Between the 1st batch and this batch, the gorgeous yummy glazed ham, back-bacon drizzled in maple syrup was… well… notably absent. Don’t get me wrong, it is still a rather good dram but oh… that meaty peaty sweetness I was greedily looking forward to was simply… different.

I returned to India to confer with my fellow Whisky Ladies – sure enough they all had the same reaction. Still a mighty fine whisky, still very enjoyable however…. “where is the bacon???”

My friends at the Cabinet had no such pre-conceived notions. And it was therefore all the more enjoyable to experience afresh through their reactions what Paul John has to offer to the world of whisky!

Here’s what they had to say…

And finally the genesis of the peat theme this evening: Carissa had brought a bottle of Paul John peated single malt whisky from Goa, India. Yes, Goa. It’s hard to imagine a locale less associated with single malt in most people’s minds. Right up there with Fiji or Egypt. But indeed, since 2012 there has been a distillery in Goa and what a distillery. 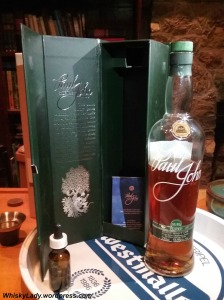 To those of you for whom Indian whisky means Amrut and for whom Amrut is a byword for crap, Paul John is a revelation. Not only is it not crap, but it is in fact very good. Not only is the quality a surprise, but the entire whisky is a surprise.
To begin with, although peated malt was apparently used, the peat character is completely submerged under an intense sweet dark fruit flavour overlay, like raisins, like molasses, like… rum. This whisky tastes like a lovely aged rum. Perhaps an 18 year old Flor de Cana.
And the colour. For a whisky whose oldest components cannot be more than four years it has the deep mahogany colour of a 21 year old sherry cask finish. Apparently the tropical heat greatly accelerates aspects of the aging process.
And then finally the alcohol. This is a 55.5% fire bomb, yet none of us added water. The rummy sweetness smooths it and softens it.
Very interesting. Thank you Carissa! It’s really an “apples and oranges” scenario when it comes to comparisons with traditional scotch whiskies. In fact last night the Rosebank and Paul John beautifully illustrated opposite ends of a series of spectrums: old and new, light and dark, astringent and sweet, austere and complex. As the rhinos dwindle away other species begin to proliferate…

Thank you Cabinet gents for a most memorable evening in Winnipeg! And thank you once again Michael of Paul John for the bottle that made its way from my adopted home to the city of my birth.