After the fabulous Finnish whisky, what next did we have in our Whisky Ladies European tour? Another Nordic whisky of course!!

And what does a passion for fly fishing and whisky have in common? Brothers Claus and Michael Braunstein from Denmark!

They see themselves as ‘Danish whisky pioneers‘ and initially focused on launching a series of limited ‘editions’ (Library Collection) then cask strength playing with maturing in a range of casks from ex Calvados to Sauternes to Cognac to Rum and more! In 2014 they launched their ‘travel retail’ editions with an unpeated Danica (what we sampled) and Danica peated.

And how did we end up with this Danica? “It was the ONLY Danish whisky in Copenhagen international airport!”

Several ladies remarked how it tastes even better than it smelt. Others felt the opposite. Quite clear it had primarily bourbon influences then sherry peaked out more on the palate and finish.

However by the end of sipping, discussing and dissecting… for most it fell into the category of ‘nothing at all wrong but nothing fabulously right either’ whereas others found this Danish whisky simply delightful!

And that is the challenge… when your evening begins with something that really captured our collective Whisky Ladies attention (Teerenpeli 10 year), the Danica didn’t quite make a mark for all.

Perhaps the peated version would have had more oomph? Or perhaps one of their cask strength expressions would have tickled more ladies fancy? Or perhaps simply on its own, it would shine brighter…

None regretted the opportunity to sample however few returned to the Danica as their tipple of choice. In fairness, this is but the beginning of Danica’s journey and an early NAS travel retail offering… who knows what will be revealed in future with age statement expressions or further editions…

What do the folks at Braunstein have to say? Here’s what they shared on the bottle:

A great whisky for whisky lovers with a sweet tooth. The non-smoked whisky has matured in a selection of finest small and big casks.

A smooth and complex whisky that caresses the palate with notes of chocolate and loads of dried fruits.

Well… small and big casks doesn’t tell us a whole heck of a lot! On the back of the bottle it then revealed “Sherry & Bourbon” casks with the batch number mysteriously empty. 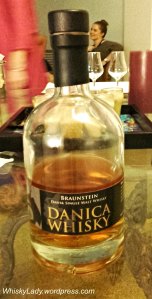 Here’s what others have to say about Braunstein’s Danica whisky:

Other whiskies sampled during our European tour included: