The Kilchoman Trilogy from La Maison du Whisky celebrates the impact of maturing in different casks on the whisky – Bourbon, PX and sherry.

As usual, we tasted blind. However, as it was a trilogy, our host kept the identity of all three whiskies secret until after we sampled the last. First up for our tasting pleasure was the bourbon cask… 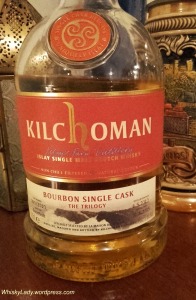 While clearly cask strength, it was a bit thin and hadn’t yet gathered the oils from the wood, so had the sense of possibly being younger.

As we discussed the possible mood or setting to best enjoy this dram, comments were:

Did we appreciate this whisky? Certainly. It was hard not to be captivated by the different elements. This isn’t a friendly neighbourhood whisky. It is a bit more intellectual and requires you to pay attention to understand it.

So what do the folks over at La Maison du Whisky have to say (translated from French) about this Kilchoman whisky?

Particularly sunny, this version aged in bourbon casks perfectly encapsulates the precise and balanced style so characteristic of Kilchoman single malts. While the notes of peat and smoke are omnipresent, they leave their mark with great elegance while setting the tone for things to come. This thoroughly subtle influence enables the whisky to gain in olfactory and gustatory power that is both nuanced and perfectly mastered. A work of art!

Not sure I would describe it as ‘voluptuous’ but it certainly was a good way to kick off our tasting session!

Next up in our Kilchoman Trilogy evening: