What happens if someone had a good idea then somewhere along the way, it fell apart, the experiment neglected and nearly lost forever? 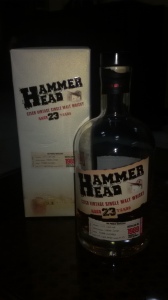 You can be forgiven for not being instantly familiar with this single malt from the Czech republic. Back in 1989, Pradlo distillery decided it was high time to make a proud Czech single malt. With only Czech barley, water from the Bohemia region, aged in 100% Czech oak. The one concession made was to use a ‘hammer’ mill masher from Scotland, a thus a single batch was produced.

Then the Berlin wall fell and everything changed. Any further production stopped and the distillery was more or less forgotten. Til 23 years later it was ‘rediscovered’ and someone again got a bright idea and decided to make some money selling this mystery malt.

The result? A curiosity piece, a great story and a remarkable slice of history all neatly wrapped up in bottle more than a memorable malt. However, it did manage to pick up an award along the way…

Here’s what others have to say:

Other samples in the ‘world whisky tour’ were: