Once upon a time if you spoke of whisky from France, folks might look at you with a rather puzzled expression. Whisky? France? Surely you mean the other W – Wine, right?

Fast forward and there are an increasing number of contenders vying for a place in the world of whisky… including from France. And with France the 2nd largest consumer of whisky after the UK and before the US, no wonder French distilleries are popping up and getting into the act.

This Guillon spirit was our 1st in a quartet of NAS whiskies with our original Bombay Whisky tasting group – sampled completely blind. 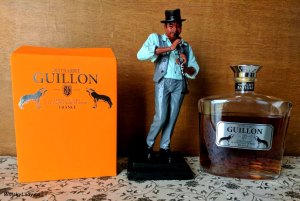 It initially reminded us of a bourbon – not with the typical brash banana caramel but instead a softer, fresher approach.

With the reveal and the decanter styled bottle, we started joking about whether we were having perfume or whisky or something else entirely?

While new to us, Guillon Distillery has been producing spirits since 1997. Owner Thierry Guillon has been aging spirits in oak barrels from French vineyards of the AOC regions of Champagne, Banyuls and Sauternes.

This particularly spirit was matured in Banyuls wine casks – a French dessert wine similar in style to Port.

But is it whisky? Turns out… it is not. After I originally shared this post, a wee twitter flurry commenced which clarified this is a ‘malt spirit’ rather than whisky… as Franck Debernardi  @LaCaveDeCobalt pointed out “They use white alcohol mixed with malt extracts/flavors and sugar. They were forbidden to sell their spirit as whisky.”

What this meant was during our evening of sampling, we were under a misconception. Where talk had turned to French whiskies… Given the range of wine casks in France, it is entirely logical that French whiskies play around with maturing in wine casks. Our Whisky Ladies recently sampled a whisky from Alsace (AWA) matured in ex Pinot Noir cask and another (Brenne) in ex Cognac casks. But was this particular liquid in that category? Apparently not!

What else did we try in our NAS evening?

French whiskies sampled over the last year or so include: