After the Glenkinchie Lowland whisky, we next planned to explore a whisky from the Highlands… However Bombay traffic being what it is, our Clynelish had a delayed arrival so we logically moved on to a Highland sub-region – the Islands.

To describe Island whiskies as diverse is a bit of an understatement. Just think – there are some 800 islands scattered around Scotland of which six produce whiskies. The islands of Arran, Mull (Tobermory/Ledaig), Jura, Skye (Talisker), Lewis (Abhain Dearg) and Orkney (Scapa and Highland Park) are home to an equally diverse range of styles.

The Island pick of the night was the Isle of Jura‘s ‘Turas Mara‘ which means ‘Long Journey’ and was launched for travel retail. 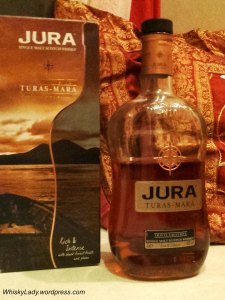 And what did our Whisky Ladies find?

One by one, those who’d not been terribly impressed by other Jura offerings, confessed they rather liked the Turas-Mara. There was a silky richness and deceptive depth.

When we learned the malt is a mix of Jura whisky matured in Bourbon barrels, Bordeaux wine, Ruby port and Amorrosso sherry casks, we understood why it is a  departure from the standard Jura style. And we approve!

Here’s what the folks over at Jura have to say about their Turas Mara: