Most single malts tell you surprisingly little about exactly when they began their life.

Sure – the bottle says 10 year but what that really means is the youngest whisky in that bottle in front you was matured for 10 years.

As for the year it was bottled? Look closely… many do not tell you this.

The key with most age statement whiskies is carefully playing around with stock to produce a consistent flavour profile. Which means more mixing and blending between casks than you might imagine to achieve that distinctive taste you have come to call a familiar friend.

However if you really want to explore the nuances of a ‘pure’ single malt, then a single distillation in a single cask preferably at cask strength is the way to go.

And no one does that better than some terrific independent bottlers who keep an eagle eye (or acute nose and taste buds) out for something truly special.

This is the territory that tells you when that whisky hit the cask, which cask and even how many bottles exist… perhaps your bottle even has its own number.

Over the years we’ve had some fabulous Gordon & MacPhail offerings, a few Douglas Laing & Co, however less from Signatory. 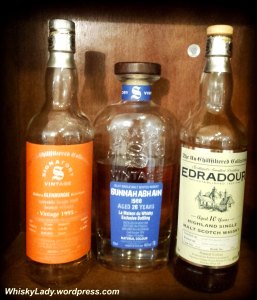 So for three years, I’ve slowly acquired three distinctly different whiskies – two examples of Signatory’s independent bottlings and one from their own wee distillery – Edradour, each from a different region in Scotland.

What pray tell did I manage to track down?

It seemed a fitting trio to fete the beginning our fifth year of whisky tastings as a dedicated group in Mumbai.

Anyone have a favourite independent bottler? Or tried a particularly interesting Signatory bottle?