Sometimes you just want a little indulgence! And why not?

A few months ago we sampled the GlenDronach 21 year Parliament… it was sherry berry desert in a bottle without being cloyingly sweet.

So naturally when given a chance to sample the GlenDronach 18 year Allardice, who could resist? 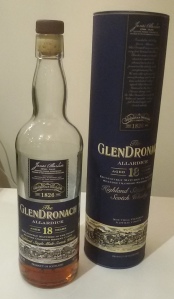 Much like the GlenDronach Parliament, it is bursting with sherry character. However did it fully meet the ‘indulgent’ desire? Hmm…

Either I’ve become a rather picky lady over the years or… this was an example where there were absolutely delightful elements, completely on the right track in so many ways yet didn’t quite whisk me away to that divine whisky heaven! Nearly but not quite!

Don’t get me wrong – this is an excellent whisky and, in fairness, it was sampled as a ‘after thought’ so did not have exclusive attention. Which is exactly why I prefer to try a whisky more than once in different settings to confirm impressions.

I would certainly try it again – ideally next to the 21 year Parliament. My memory of the Parliament is that if you want something a bit indulgent? That’s your whisky from the GlenDronach stable! 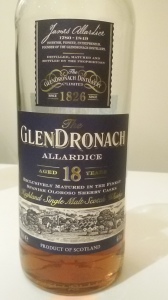