For the most part, our whisky wanderings are firmly in the single malt category… with a few exceptions. This James Eadie that made an appearance in Aug 2021 was one such occurrence.

It was hunted down by a fellow whisky explorer who after we tasted shared the story of Rupert Patrick – the current owner – who found records of his great-great-grandfather’s blend, sampled some surviving bottles (turns out they were from the 1940s!) and then worked to reconstruct with a whisky expert (Norman Mathison).

What more do we know about James Eadie? For this particular “X” edition, their website shares:

In recreating Trade Mark ‘X’, only whiskies form distilleries which he personally bought from have been included in this blend – including some which have long ceased production.

As he specified, these whiskies were matured in either American oak or sherry wood.

Finally, we invited veteran Master Blender Norman Mathison to use his four decades’ worth of expertise to bring Mr. Eadie’s whisky back to life.

The result is an elegant, peaty dram, which offers a rare glimpse into the art of blending from the first Golden Age of Scotch whisky.

So that was the promise, what about our experience with the liquid? 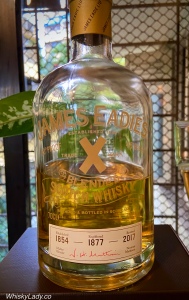 We tasted this blind and initially thought it may have quite a high alcohol strength… however as it settled in the glass though perhaps not after all as it went from punchy sharp to quite light.

We didn’t initially think of adding water but thought, why not?

What a discovery! It became quite lively with a lovely peat revealed. While it made the body lighter, it gave more character and style. Well worth trying that way.

With the reveal we were all surprised – while we couldn’t guess the distillery we didn’t catch on to it being a blend either. Interesting. Our whisky “host” shared the cost – which I later looked up as being EUR 45.

I kept aside two small samples – one to take back and keep in Nurnberg and another to forward on to Paris. In a few months some additional impressions may join our original thoughts. I’m looking forward as this definitely was one I’d like to revisit! 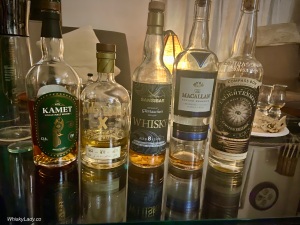 What else did we try that evening?