Teaninich isn’t a distillery you readily find single malts at your corner whisky shop or travel retail. While part of the Diageo stable, it finds its way mainly into Johnnie Walker with limited official bottling – just part of the Flora and Fauna series.

Like many distilleries, it had a checkered past – founded in 1817 – even having an India connection with its original owner. It was sold several times and mothballed a few too, getting a complete revamp in 2013 with 16 new stills beside the old distillery which was demolished in 1999. It also is distinctive for using a filter press rather than mash tun to extract sugars.

As with everything… proof is in the pudding… or tasting in this case! What did we discover? 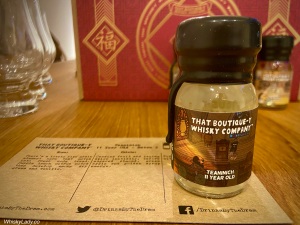 Not exactly my favourite style and not sure this is the best example of the distillery either… it was a tricky style that for me at least didn’t quite work.

What do the folks over at Master of Malt have to say?

It’s the second batch of indie Teaninich from That Boutique-y Whisky Compnay! This single malt was matured for 11 years, until it was independently bottled at 47.9% ABV. The label recounts the saga of Teaninich founder Captain Hugh Munro, who lost his eye and consequently wasn’t allowed to marry the woman who he was betrothed to. Sounds like something out of a movie, doesn’t it?

What else did we try in our That Boutique-y Whisky Company Chinese New Year Quintet?